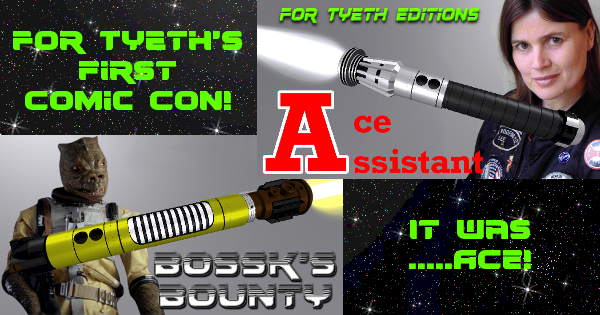 Hello again, welcome back! On this page I will tell you about my encounter with the Bounty Hunter(s) called Bossk. Hunter(s) wasn’t a typing error, let me explain. On the next table to Miss Aldred was the display for Mr Alan Harris who as you know portrayed Bossk in Empire Strikes Back and in Return of the Jedi. He also stood in for Terence Stamp as a double and various other roles around the SW galaxy. Feeling brave and full of the force I approached Mr Harris and introduced myself. We had a short chat about Empire and I thanked him and told him I appreciated the efforts he put into the role of Bossk. Some people may have missed it but in the scene where Vader instructs the Bounty Hunters to capture Han Solo, Bossk is stood on a gangway above some Imperial minions. One of them looks up at him and Bossk responds by giving the offender an evil glare. This would be difficult in the head mask and costume, but I saw that Mr Harris exaggerated the pose and tilted Bossk’s head to give off a look of contempt. This prompted Mr Harris to say “You mean like this…” and then recreated his scene complete with a hissing snarl! It was awesome.

I explained I had Bossk’s Bounty for him and Bossk then proceeded to show the pictures I had. Mr Harris could see the resemblance and saw what I tried to achieve and appeared impressed. However more fans were filling in to chat so he had to excuse himself and I went on exploring the convention. This was when I encountered Bossk number TWO! 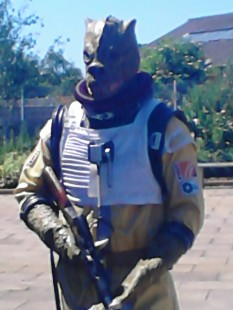 May I introduce Takamatsu!

Regular followers of this site know I am a member of an online forum dedicated to custom lightsabers. Well, one particular member posted a guide on how he assembled a Bossk costume step by step. I was amazed by it’s detail in his photos. As the forum is based in the US, I mistakenly assumed he was American. Now I go over and start chatting with the group of Cosplayers that included Bossk and I get to talk about lightsabers as one cosplayer had a pair of sabers, then it happened.  The gentleman dressed as Bossk introduced himself as Takamatsu, the very same member from the forum…I was speechless (I know it doesn’t happen often 😀 ). So after my shock we chatted and I showed him Bossk’s Bounty and got his approval too! So my design has been liked by TWO Bossks! The day couldn’t have gone any better.

I am running out of time and I am very tired from my travels so will have to end soon but as always and more importantly today I have some thanks to hand out. To Sophie “ACE” Aldred thanks for putting me at ease and your kind words. Mr Harris, thank you for your impromptu  performance as Bossk and your comments. The organisers of the convention, the staff and visitors who all made it a fantastic day, thanks. Finally thank you, my followers and viewers for checking this post out and your support. I should hopefully have gained some inspiration for new designs so please call back to see those but for now I am off to dream….Till next time.

This post is copyright of For Tyeth/FTSabersite 2017. All Trademarks/©Copyrights that may appear are property of their respective owners.

8 thoughts on “For Tyeth’s First Comic Con – It was Ace!”