Hello Everybody, welcome back. Yesterday I posted a quick announcement of a new project I am working on based on the new upcoming The Clone Wars Season 7 show, so I only have a short post today showing something I have been working on. Recently I have been in “negotiations” with the banking clans on Earth and I have decided to enter the world of stocks and shares, commodities and ForEx! But first I would need an investment or collateral sooo I went and had a rummage around my workshop to see if I had anything of value to trade. Well low and behold something appeared in an episode of the TV show “The Mandalorian” that reminded me of some objects I picked up many many years ago and those objects looked like one of these…. This is an ingot made of Mandalorian steel which is also known as Beskar! Beskar is a very valuable (and treasured by Mandalorians) metal used to create battle armour. It is resistant to blaster fire and can even deflect lightsabers so it can be very useful making it valuable. Guess what? I found a crate FULL of these ingots buried under some boxes of lightsaber parts and I have these….

I have quite a stash and more than enough to start investing in financial endeavours….however, I have kept a few in reserve and done something special with those bars of Beskar…..I have forged a Mandalawrian Saber in solid Beskar! This very limited edition of my saber looks like this….

As you can see this hilt has the same texture as the bars/ingots of Beskar! And the pattern of wavey lines is known as a “Damascus pattern”. It is seen in metalworking found on Earth but has been a feature of Mandalorian metalwork for thousands of years. The metal is very versatile and can be forged, melted down to form a foam, hammered into plates, used in machinery and architecture….just about anything. So this saber has a very big advantage against other sabers….because of the properties of Beskar, it can as I mention above deflect lightsaber blades and momentarily disrupt that blade so the saber temporarily malfunctions. Imagine you have this Beskar hilt and your opponent makes contact with their blade on your hilt…their blade would shut down giving you a short time to counter attack. Your saber would also be less likely to get chopped in half! I kinda like this saber but I have other new stuff lined up so I will give you all a bit of a sneak peek.

As I posted yesterday I have modeled the new saberstaff seen in the trailer for The Clone Wars and one half of the staff is the remaining half of Darth Maul’s famous double bladed weapon, and the second half is made up of a saber owned by a former Sith named Asajj Ventress! You may have seen her in the Clone Wars cartoon as she was an apprentice of Count Dooku. She used twin red curved hilts but she also used a yellow regular saber hilt too. And I have modeled that to construct the new Maul staff I posted yesterday. Here is a pre-render preview of my progress on this Ventress hilt so far… 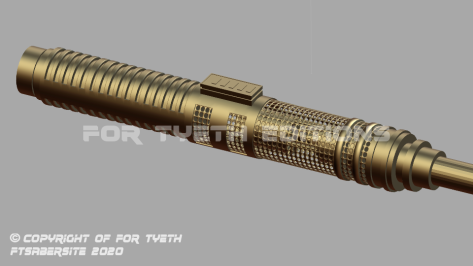 There are a few tweaks I need to make but I feel this is a solid basis to improve on. I will feature this and an article on Ventress in a future post complete with Glamour Shots and maybe an animation! So that just about wraps up this post and my Beskar build, I hope you liked it, I think it is quite distinctive.

Thank you all for looking in on this design and for supporting me and my site. As always you are much appreciated and I am proud to say my viewing stats are rising meaning word of my efforts is spreading so thanks if you have told friends and family or social media about FTSabersite. I have more new designs to bring you including a couple of curved hilts, a saber that nods to Obi-Wan Kenobi and I may have a tribute to an upcoming movie with a beautiful sword! I sincerely hope you’ll call back to see those. Till next time…..

Hello Everybody, today I bring you the second of the Mandalorian inspired hilts I have made and this one is based on the original Mandalorian bounty hunter we saw in a Star Wars film or series. That man is Boba Fett, the mysterious bounty hunter that cashed in Han Solo to Jabba the Hutt. We first see Boba in Empire Strikes Back when he is hired by Darth Vader to hunt down Han and the Rebels. However, believe it or not, Boba Fett despite all his popularity only spoke FIVE lines of dialogue in all the time he was onscreen. He also met an unfortunate end whilst fighting Luke Skywalker on Jabba’s Sail Barge skiff when a semi-blind Han inadvertently struck Boba’s jetpack and sent him out of control into the Sarlacc Pit. 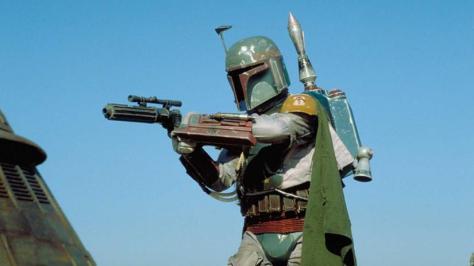 In a book which has been released since Return of the Jedi came out hints that maybe Boba survived this ordeal as a set of Mandalorian armour was found on Tatooine near the famous Sarlacc Pit…so if Boba is alive he may be looking for some new weaponry…how about a saber? Well…I just happen to have one he may like…here is BOBA Legend Saber…

This is the same hilt as the “Mandalawrian” hilt I built but there are some subtle differences. As you can see it has been re-coloured in Boba’s famous green, grey, red and black. I added a yellow panel on the side of the hilt to represent his shoulder pauldron/armour but I think my favourite modification is the new visor area. I re-coloured one of the chrome ridges to red and it looks just like his helmet face plate… 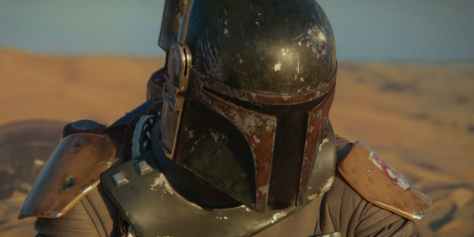 And in the image above you might just be able to make out a dent over his left eye, and I even added a dent on my hilt…it’s just under the letter “D” of editions in my watermark…

The saber has a Mandalorian logo on the handgrip but interestingly it has been reported recently that George Lucas has stated that Boba and Jango Fett (his clone father) aren’t actually native Mandalorians. I can’t be 100% certain of this as I have only seen one YouTube video on this topic but I will look for further details to find the truth. And speaking of YouTube, FTSabersite may be featured in a big way on that social media platform soon – however secret negotiations are ongoing and I’ll let you know more when details have been finalized – but keep your eyes open!

I’m sorry this post is a little shorter than usual but this hilt only needed minor tweaks to create it’s new looks. I hope you still enjoyed the design however and rest assured I am continually working on new designs and models. I have a pair of matching hilts for a mystery lady from The Rise of Skywalker, some bespoke designs based on a classic Original Trilogy hilt, a few sabers for my friends including a very Nerdy friend and….I have the final Master Series hilt with glamour shots and animations galore all coming in future posts.

Please call back to see all of that and maybe even more but for now I’d like to say a big thank you for your visit today. Due to all your support I am fast approaching the 15.000 views mark which is unbelievable so, whether you are a first time visitor or a regular viewer/follower thanks so much it is really appreciated. Till next time….

“BOBA Legend Saber” is a For Tyeth Editions design and is ©Copyright of For Tyeth/FTSabersite 2016-2019. “Boba Fett”, “Jango Fett” and all other names, images and related material are Trademark/©Copyright of Disney/Lucasfilm.

Hello Everybody, today I have a special saber based on the new Disney/LucasFilm TV series which has just debuted on Disney’s new streaming service Disney+….The Mandalorian. Now I don’r have access to Disney+ as it hasn’t launched in the UK (boo!) and I can’t afford the subscription even if it was available here. However from the trailers I have been able to see on YouTube and pictures seen online I gathered this show centers around a mysterious character known as The Mandalorian, who is a bounty hunter during the time between Return of the Jedi and The Force Awakens. He seems to be a modernised version of Boba Fett the famous bounty hunter that eventually captured Han Solo for Jabba the Hutt. The Mandalorian has similar gadgets, body armour and iconic Mando style helmet as seen here…

The Mando is armed with an imposing blaster rifle but I felt a character like this needed a saber….well you know me, I built one for him! And here are a few images of that saber. I call it the MandaLAWrian!… 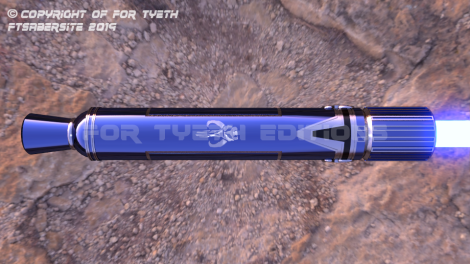 The hilt is modeled to represent the Mamdalorian’s body armour and helmet and is a pale blue and silver in colour (the images look dark blue but that is the environment image casting coloured light onto my model- look closely on these models and you can even make out reflections of the scenery sometimes).

The emitter has ribbed panels that mimic a rifle barrel both inside the emitter and on the outside while below that on the hand grip is a symbol called the Kyr’bes, the logo of the Mandalorian clans. The symbol depicts a skull of a Mythosaur.

The pommel is quite interesting, I don’t know if this particular Mandalorian has one but Boba Fett was famous for having a jet pack, so I modeled the pommel to represent the exhaust nozzle of such a backpack…

And the “crowning glory” of this hilt is the activation switch that I modeled to be a touch sensor shaped to look like the Mandalorian’s helmet and visor details. The black “visor” segment is a touch panel like those on your smart phones…just swipe your thumb up the “visor” to activate and sweep down to switch off! I even modeled the little lugs found over the “ears” of the helmet. Boba Fett’s helmet actually had a radio transmitter built into these parts. I’m not sure if the Mando has radios in his but here are a few closeups of the helmet/switch section and one final full length glamour shot…. 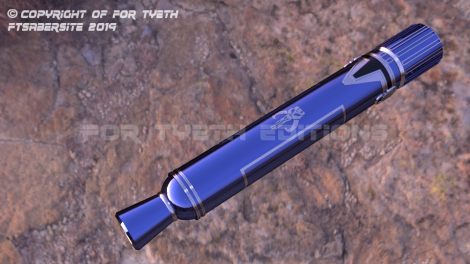 As I say I haven’t seen the new show but I think I have created something suitable for the biggest baddest bounty hunter this side of Black Spire! Now he is fully equipped to round up the rogues of the galaxy and bring them to justice.

That just about wraps up the Mandalawrian Saber, thank you so much for checking it out. I really appreciate all the support and kind words you leave in the comments section, so whether you are a first time visitor or one of my loyal long time followers, thank you so much. Please remember to click to follow if you haven’t already so you will know when my next sabers are posted, you won’t want to miss them…I have My Master Series hilts to come, another Mando saber for Boba, a few new Obi-Wan Kenobi inspired sabers, one for a mystery lady in The Rise of Skywalker…..and one for Rey! That’s a lot of hardware!….Till next time…..