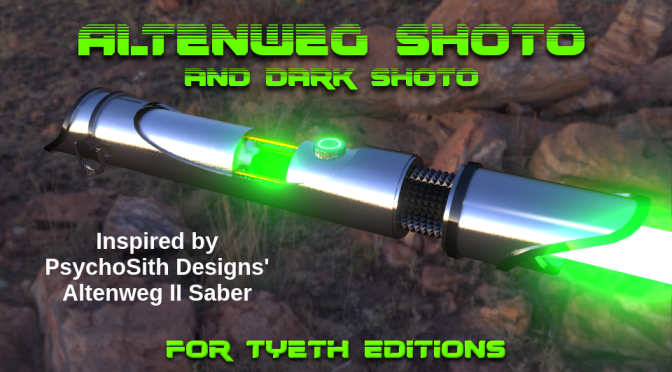 Hello Everybody, I hope you all enjoyed my debut art collection last week. It gave me time to work on some animations for my upcoming hilts and I also managed to come up with a new design inspired by my friend PsychoSith’s “Altenweg II” saber he sketched a few months ago and posted on Ultrasabers’ SaberForum.com (I will be posting Altenweg II next week!). And this new hilt is a weapon known as a Shoto, which is a slightly smaller one handed saber used mainly for defense to block attacks while you use your main weapon to attack.

There was a section of Altenweg II that I loved and that was the handgrip with a scalloped cutout. I thought that part would make an awesome body for a hilt in itself so I set to work and built an emitter and pommel for it. Now the reason I liked the cutout was that I imagined the cutout would allow the internals of the saber to show and so I added a crystal chamber. The saber took shape nicely with sweeping lines and looked a little bit like this…

In this Wireframe image you can just make out the chamber sat within the cutout. The saber also has the “Choke Point” which is the thin neck that connects the emitter to the body. The pommel is made to mirror the emitter as I used the outer shroud of the emitter and shortened it slightly to form the part. I also added a neat three dimensional speaker/ventilation grille in the pommel. There is also some nice accenting ridges and colours on the hilt but you can’t tell that from a wireframe can you? You want to see some “Glamour Shots”…OK here are a few pictures….

I was quite pleased how this hilt turned out and I felt the lines swept nicely from the tip of the emitter to the tail of the pommel. I achieved this by using the emitter shroud as the pommel but I also shortened it slightly and rotated it 180 degrees so it was “upside down”. This created the illusion of an elongated “S” shape if drawn from the tip of the emitter to the end of the pommel. Careful inspection of the pommel also reveals my 3D grille I modeled for the speaker/cooling vent. The scalloped cutout from PsychoSith’s hilt perfectly houses my crystal chamber and switch section. And on the emitter and pommels I added raised ridges with a contrasting colour which I felt help define the sweeping lines. And as I have been tinkering with animations I thought why not produce a quick 360 degree animation of the hilt. (Again it is short as I am limited in how long these clips can be – but when I have time I am working on some special animations which are coming soon) Here is the Altenweg Shoto 360…

I also discovered that this hilt would make a good looking “Darkside” version too so I built a “DarkShoto” hilt with a reverse colour scheme and Sith red crystal and blade. And as I am an “equal opportunities” type person and believes in balance of all things I guess I had better post the “DarkShoto” pictures too…here are a few more “Glamour Shots”… 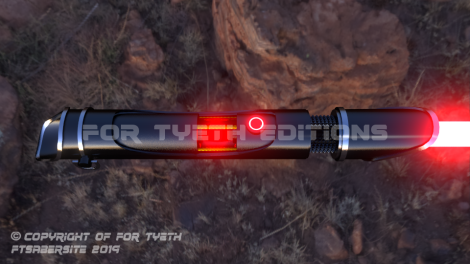 I really think this hilt has a good balance of elegance and evil! It still manages to look good despite it’s evil intentions, plus piano black and silver is a classic colour combo. While I built this version I figured I might as well give it the 360 treatment as well so here is another quick clip, this time of Altenweg DarkShoto…

This clip shows the hilt from a slightly different angle which caught my attention to a detail that led me to produce a THIRD version of this design. But I will save that one for another post as it is inspired by and connected to a particular “watery” Star Wars character! I seem to be very busy with all these hilts.

I think that just about wraps up this post and I hope you enjoyed it. I have to thank PsychoSith for his original  saber which triggered this design. He is a great artist and I have more PS sabers coming soon (Alltenweg II of course next week). I also have a whole pipeline of sabers to show in the next few months including my KOTOR/SWToR inspired sabers, there is my “Mystery Guest” hilts which I teased last week with the “Colour Cube”, and if that isn’t enough I have my “Master Series” models to showcase! Speaking of which…

I hope you will return to see all of this and maybe more in future posts but for now thank you so much for all the support of myself and FTSabersite. You are all very much appreciated and please continue to comment, like and spread the word about the site. Till next time….