Hello Everybody, now technically as I type this it is 03:30 Friday morning in the UK, so it is the beginning of the weekend (sort of) but I am so excited I felt I had to post this now.

I have over the past 2-3 days been working on a 3D model of “Darkside” Rey’s new double lightsaber switchblade staff. I started off with a screengrab from the new trailer which was very blurry and didn’t show much detail, however I interpreted it as best I could and came up with this “windowed” version with a very poor looking hinge (that semi-circular black thing on the pommels)…

I thought it was OK as a base model to later modify and so I went crazy and spent most of the day “tinkering” to make it better and more accurate. I found a much sharper image of the saber and found that I had obviously made mistakes, the four windows were in fact part of a “Slotted” emitter with a circular “Glass Eye” window. A Glass Eye window is the round lens that is found near the emitter of a Graflex lightsaber which allows the light from the blade to shine through (In reality it was the lens for the light measuring mechanism of the Graflex camera flashgun handle). I realised I needed to tweak the proportions and thickness of the coloured bands, I also needed to add a few detail parts and REALLY needed to do something with the hinge. I believe that some film trickery helped how the saber looked in the trailer as it extends but I haven’t got that good to do an animation like that…yet! So here was my second build with a hinge I made based on a Universal Ball joint seen on drive shafts of cars…

As you can see I added a Universal Ball joint hinge, which is the two spherical pommels connected by a curved plate. The plate pivots 90degs at both ends so that the saber handles straighten out to point in opposite directions and form the staff. I also installed a couple of activation switches to match the blades, but I still knew I could do better so I worked on a more accurate hinge mechanism that looked like the one on screen (even if the bracket seen on screen can’t hinge!). I built the new hinge and that brings me to my final version which I present here. I am sure I have still gotten parts wrong but if I try and make more fixes then I might ruin what I have already (maybe when better footage/images are released I might revisit this hilt) Now onto the “Glamour Shots”… 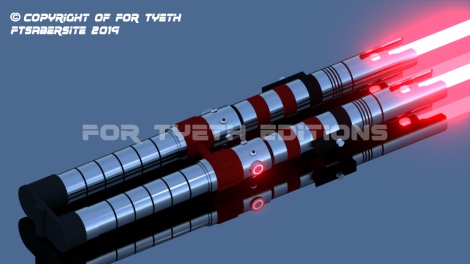 I added a ring of Hexhead Wrench screws around the switch section along with a pair of switched (I am still not certain where the real switch position is so this could be changed later) Also added are the black rectangular blocks with the thumbscrews. The hinge, I suspect is an end cap for scaffolding poles used for mounting Amateur Radio enthusiasts’ antennae (this piece encloses/connects the bottom of the mounting scaffold pole and the bottom of the aerial tube itself). I think it looks like the one seen in the pictures and video. And now you want to see the staff version right? OK, here are the extended staff “Glamour Shots”…

Hopefully I have done a good job overall. This is the most intensive project I have done, both in detail and timeframe…a lot of detail in a very short amount of time to build. And I think I may have beaten the big names in custom saber manufacturers in displaying a version of this hilt!

Well that just about wraps up this post, except to say I am really looking forward to seeing “The Rise of Skywalker” in December (20th) and find out for certain whether Rey has turned to the Darkside or if this is a “Clone” of her, or even just a Force vision flashback/premonition (hard to see the future is, always in motion it is!). So as is my tradition, I’d like to thank you all for looking in on this design and for your support of me and my site. Whether you are a new visitor (and there have been a few recently) or a regular caller, you are all very much appreciated. If you liked what you saw please spread the word about FTSabersite to friends and be sure to call back to see many more new hilts and designs in future posts. Till next time…..

p.s. I hope you don’t mind but I’m going to have a rest over a long weekend now (Phew!) Back to work on Monday….

“Rey of Darkness” saber is a For Tyeth Editions rendition and is ©Copyright of For Tyeth/FTSabersite 2016-2019. The Rey “Switchblade” saber staff, and all Star Wars names, logos, images and related material are Trademark/©Copyright of Disney/LucasFilm ltd 2019.

Hello Everybody, just a quick post to let you know I have been busy “tinkering” with my attempt to recreate the new “Switchblade” saber seen in the new teaser trailer for “The Rise of Skywalker”. I have managed to get a better resolution picture of the new saber/staff and so reworked my first attempt. Below is a “clay model” render to show the new build off (I feel like a car manufacturer showing of a new car shape with one of those clay sculpture models seen at motor shows!). In a change of schedule due to this new buzz there will be a FULL COLOUR gallery and post coming this weekend, but for now here’s that clay model picture just to get your attentions!

Thanks for looking in on this announcement and I hope to see you all this weekend for my post on this model. Till this weekend…..

“Rey of Darkness” is a For Tyeth Editions design and is ©Copyright of For Tyeth/FTSabersite 2016-2019. It is based on the new lightsaber from the upcoming movie “The Rise of Skywalker” and all Trademarks/©Copyrights belong to Disney/LucasFilm 2019. 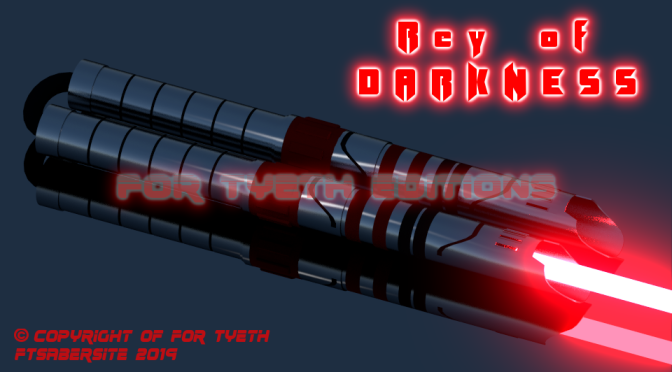 Hello Everybody, yesterday a teaser video dropped for the new film “The Rise of Skywalker” and there was an immediate buzz about the last few seconds where we see something we are all dreading (unless you are part of the Sith!) – REY as a Darksider?

She has a double ended, folding staff lightsaber and dark robes which brings me to the reason for this impromptu post. I have two questions….

Will Rey turn to the Darkside? And second….should I keep working on this design to make it better? 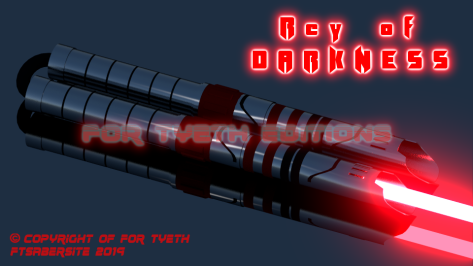 Let me know! Thanks for looking in on this quick sneak peek…man I can’t wait for the 20th December now! Till next time….

“Rey of Darkness” staff is a For Tyeth Edition rendition and is ©Copyright of For Tyeth/FTSabersite 2016-2019. It is inspired by the design seen in “The Rise of Skywalker” trailer which is Trademark/©Copyright of Disney/LucasFilm 2019.

Hello Everybody, I realised this past week that there is only three months till the release of The Rise of Skywalker and how time flies. I also received a message from WordPress congratulating me on my THIRD Blogversary. So I figured I needed to post my updated TY Silencer Saber hilt ready for when the new film comes out. A good friend of mine called Lord_S_Gray on the forums, suggested that I added some silver accents onto my original model to help define the shape of the hilt. I did this and it worked wonderfully but I didn’t get a chance to post the update as I received a few requests for other certain hilts to be built. When I had spare time I took another look at the TY Silencer and as there was a new TIE-Fighter variant shown in The Rise of Skywalker as you can see in this trailer….

I decided to modify my saber even more. Now the ship seen in the trailer isn’t the same as Kylo Ren’s fighter as this ship has a traditional round cockpit section but I liked the red, black and silver colour scheme and adopted it for my Silencer saber, I also added a few laser cannons too…not that the pilot of the ship in the trailer knows how to fire them. Anyway I have chatted enough, how about a few pictures? Ok here is TY Silencer TROS…

I kept the base black colour but the ship/saber now sports silver accents on the handgrip to reveal it’s contoured shape better and the clawed wings feature a silver edging and have “solar panel” textures to give a bit more detail. The wings also feature new laser cannons mounted in the side panels between the points of the wings. The wing pylons also have new red parts to represent the new mechanical parts seen on the new ship (I don’t know if they have any special function but do add interest). The cockpit section is now painted with the new red squadron markings to finish off the new aggressive look.

As this is a remodel of an existing design I didn’t have much to show that I did within Blender, I just tweaked bits so any studio pictures would look very similar so I have rendered a few extra “Glamour Shots” for you all…oh and I tried to recreate a scene from the trailer!…..

Is this The Rise of Skywalker

Or is this The Rise of Skywalker! 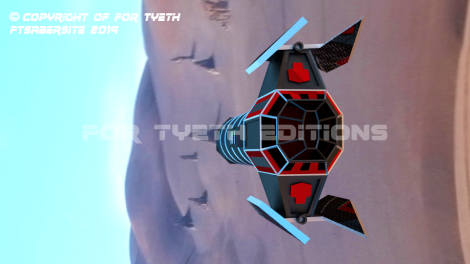 I used to do backflips when I was a younger saber designer…but as I get older my body fails so I had to learn new tricks and I have another to show you here. As regular readers/followers will know Blender 3D is also a 3D Animation software and I have started tinkering with short little video clips (though it is a bit daunting and not straight forward as there are so many techniques to accomplish the same goal that there isn’t a right or wrong technique…it gets complicated). So here is a very short clip so don’t blink or you may miss it (this ship/saber flies very fast!)…..

So as the TY Silencer TROS finishes it’s flypast (maybe the pilot is in a rush to buy tickets for the release of the film?) I am approaching the end of this post. As always I need to thank you all for looking in on this design, whether a first time viewer or regular visitor to my site thanks so much. It is a testament to you that I am still blogging after three years. And please spread the word about FTSabersite and call back for future posts as I still have a lot more to designs and hilts to come (I am always designing). So thanks again….Till next time…..

“Ty Silencer TROS” is a For Tyeth Editions design and is ©Copyright of  For Tyeth/FTSabersite 2016-2019. “The Rise of Skywalker” and the TROS video clip/”backflip image” seen here is Trademark/©Copyright of Disney/LucasFilm ltd.