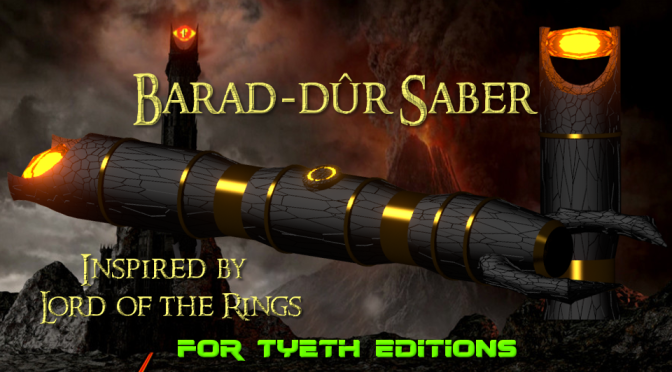 Hello Everybody, today I take inspiration from an absolute classic story, the story being the Lord of the Rings trilogy by J.R.R. Tolkien. I have been designing sabers for over three years but never ventured into this fantasy realm as a few other Sabersmiths had done LOTR inspired hilts. However during a conversation on the Ultrasabers forum several members commented they would like to see what I could come up with. I had recently been experimenting with new modelling techniques to create more organic shaped parts such as claws. I came up with a design based on the famous dragon creatures from Star Wars (called a Krayt Dragon) but it seemed to lack something as you can see in this picture… 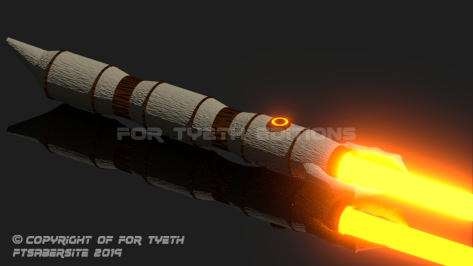 It has a texture to make it look like it is made of bone, it also has bony claws and hammered copper/gold bands. But I didn’t like the pommel, it literally just tailed off and I thought I could improve on this. When the members mentioned LOTR I realised this was my opportunity to tweak this design. I set to work. I felt that the shape was something you might see in the land of Middle Earth, maybe a weapon an Orc might carry or maybe a wand like object that the wizard Gandalf might own. No, this hilt needed to be big and there was a very big object in Middle Earth and it was Barad-Dûr, or the Dark Tower so I based my new hilt on that edifice. Here are a few work in progress pictures… 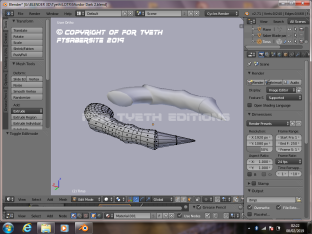 The pommel with texture and crystal.

The pictures above show how I used the “Mirror” function to create the pair of claws. I created a tube and stretched it along a curved line. By varying the thickness I was able to create the “joints” then taper the tube to a point. The mirror function ensured both claws were identical. Then I needed to work on the pommel, and this is where I think I nailed the look I was after. In the “second age” of Middle Earth the evil warlock Sauron built the Dark Tower in Mordor and atop the tower was a large glowing orb known as the “Eye of Sauron” and I rebuilt a replica of the tower ornament. I created two intersecting hollows to form a pair of “horns” between which I suspended a glowing crystal shape to form the “Eye” itself. The “bone saber” above was too light in colour and had the wrong texture so that had to change. The Dark Tower was made from black rock like Onyx or Obsidian, so by tweaking the material the saber was coated with I found a pattern that replicated cracked rock. All these details combined resulted in the hilt Barad-Dûr and here are a few Glamour Shots…

Hopefully this design is a good homage to the fantasy of Tolkien’s imagination. I think the rock texture sets the dark theme contrasting nicely with the gold bands. The orange/amber crystal has a similar fiery glow as “Sauron’s Eye” and illuminates the hollowed pommel nicely highlighting the cracked rock. I am pleased how this design developed from my initial build, it just needed a great source of inspiration.

I haven’t covered the story of the LOTR trilogy as there is too much information to relay but I highly recommend reading the books (as I did as a youngling) or watch the Peter Jackson on screen version (if you haven’t already!). I think this just about wraps up this design and post and I really hope you liked it. It made a real change for me to try a different genre. As always I haven’t stopped here and still have around ten more new designs to share in upcoming posts. I hope you will return for those (I promise the Norse God will get his saber soon!) but for now I have to say a big thank you to all of you for visiting FTSabersite today. Whether you are visiting for the first time or are a regular follower, you are all appreciated. Till next time….

“Barad-Dûr Saber” is a For Tyeth Edition design inspired by the work of J.R.R. Tolkien and the subsequent movie trilogy. “The Lord of the Rings” is Trademark/©Copyright of the Tolkien Estate. Movie credits: Production Companies: WingNut Films and The Saul Zaentz Company. Distributed by New Line Cinema.