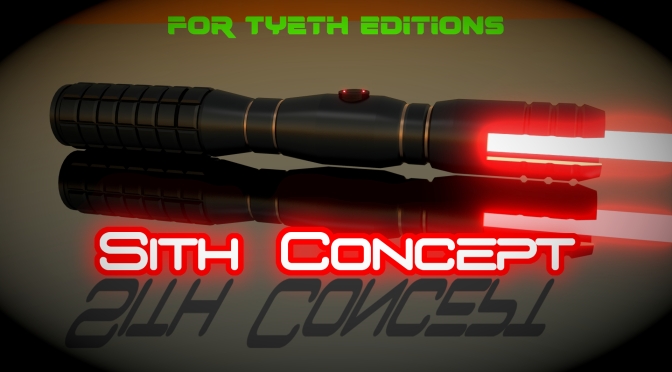 Hello Everybody, I am back and at 100% after last week’s slight off par performance. Thanks for the get well wishes. So today I am showcasing a design I did back in 2019 for a friend of mine from the Ultrasabers forum named Karmack. Karmack owns several Ultrasabers brand hilts and is well known for repainting them in his own “Clan colours”. Anyhow, he and I were chatting on the forum and the topic of what Ultrasabers new Version 5 wave of sabers might look like and it was suggested that I attempt to come up with a possible update to an existing saber. I chose a hilt that Karmack owned called the Aeon V3 and set to work modifying the design. The Aeon is a nice lightsaber already, solid and durable with great ergonomics with plenty of places to grip it allowing the saber to be used for many styles of combat. It looks like this…

As you can see it is sleek and curvy. So I had to come up with something similar but different and I decided I wanted to incorporate an acknowledgement to a classic saber, the one owned by Obi-Wan Kenobi. The saber we see Obi-Wan use in the original Star Wars film had a distinct handgrip that featured a turreted block pattern similar to a hand grenade – and it won’t come as a surprise but the actual prop was constructed using a real World War 2 rifle grenade body. The grenade grip style I thought would give the Aeon a totally different look and feel. I set to work and came up with this base model….

I took the basic outline of the Aeon design and I replaced the Ultrasabers’ handgrip of engraved rings and added a grenade block grip (sometimes called a “Pineapple”). I also felt the emitter/blade holder was a bit plain so I cut a slot down the middle of the emitter to produce a “forked” appearance.

This model was created when I was having my “MatCap” madness moment – MatCap is a method of creating a virtual “clay model” in Blender 3D to view how a model will look using a single texture or material hence the term MATerial CAPture. But this design would need to have proper textures and as the design was more aggressive I went with a Darkside colour scheme….time for a Glamour Gallery….

As you can see I went classic black and gold, using the gold to accent lines of the hilt around the switch section to break up the plain black coating. The Sith red blade blazes out through the slotted emitter giving it an almost crocodile-like mouth look. I also added an Anti Vandal switch instead of the plastic switch seen in Ultrasabers’ official product image above….AV switches just look sleeker/nicer to me.

The Ultrasaber line up of sabers did have one feature that some folks didn’t like quite as much and that was the design of the pommel end cap. Now for some sabers that produce sound you need a hole to vent that audio so Ultrasabers gave their hilts a pommel with a hole cut out large enough to vent sound but small enough to prevent the saber’s electronics slipping out. This led to basically a doughnut (do-nut) shaped pommel with an open hole which exposed the speaker (which concerned a few people as damage could occur if an object found it’s way through the hole) so I added a speaker grill that also acted as decoration. Time I think for Gallery Two….

I think this designs works and gives an existing design a totally different look. Ultrasabers do have a “Darkside” version of the Aeon V3 called the “Doninix V3” but it is just coloured black instead of silver. My design and images have never been posted as I kept them just between myself and Karmack because other members of the forum tried to convince the owners of Ultrasabers to hold a design contest and I would have entered using this design. Alas the contest was never realised and this saber has been sitting on my hard drive for THREE years now…so I figured I may as well showcase it today.

That just about wraps up this “Sith Concept” saber. It was fun to build way back when I was only really starting out with Blender. I hope you enjoyed a belated look at it. I also hope you will return to FTSabersite for future posts as I have more to show you all…including more Katana styed lightsabers, more Nerfing fun (yes more blasters!) and maybe some more costuming and LEGO content. So thank you for calling in today, all your support, comments, likes and subscriptions mean a lot to me and really do inspire me to keep designing and posting. So new or regular visitors, thanks so much. Till next time….