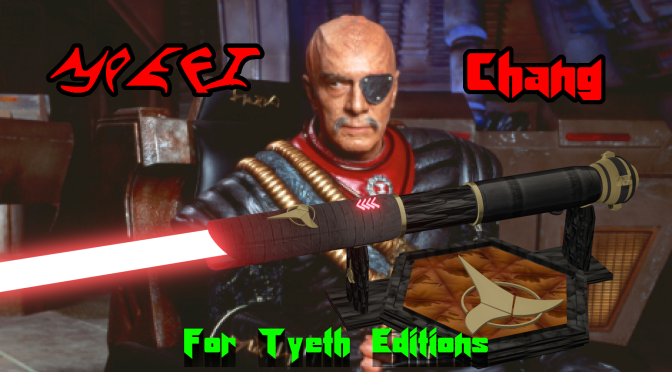 Hello Everybody and welcome to another new design. This time I go back to the Star Trek franchise and the film “The Undiscovered Country” and after a comment made by my friend Resa. Resa commented on my last Star Trek hilt the “Horey’ So ‘Eth – Honour Blade” design and mentioned the fantastic actor Christopher Plummer who appears in “Undiscovered” as a Klingon general. This general is at the center of a conspiracy to frame the United Federation of Planets and scupper peace talks between the Klingons and everyone else. This event was known as the Khitomer Conspiracy and it involved Plummer’s character, General Chang using a special Bird of Prey ship with a cloaking device that allowed weapons to be fired whilst activated (which was not normally possible) and attack the Klingon Chancellor’s ship the Kronos One. The only other visible ship in the area was the Enterprise which was escorting Kronos One so it appeared as if Enterprise opened fire. When Kirk and McCoy transported aboard the Kronos, Chang arrests them for murdering Chancellor Gorkon. All very bad news as Kirk and McCoy are then put on trial and Chang “proves” his case against them. Anyhoo it’s a very sinister and clever plot that shows how cunning Chang is so I thought he would have a saber too, especially if the lower rank and file Klingons might have one. So here is the saber I designed, this is “Chang”….

This saber is in slightly better condition than the “Honour Blade” and has a fairly intact coat of paint, in a nice matte black. It also features a shorter leather wrapped handgrip that is separated from the emitter module by a thinner section wrapped in a cross-stitched material to mimic Chang’s battle armour. Oh I forgot I haven’t inserted a picture of General Chang so here he is….

As you can tell by the look in his eye, he is cunning and wily. He also looks slightly more human than Klingon, this is due to his family being infected by a virus that altered their genes and affected his appearance. His eye was lost during a blood duel against the usurper Kalnor who attempted to gain control of the Klingon Empire. You can see Chang’s padded armour clearly and I think the wrap I added looks similar. His outfit also has a bit of military “bling” so I added some gold decoration to this hilt in the shape of the Klingon Empire logo (aka the Kahless Blades symbol) and a gold skull crusher style pommel. But there are a few more details so here is Gallery Two…

Yes, I couldn’t help myself and added a logo on the pommel end cap too and it looks just right to finish the hilt off. The activation switch is borrowed from the Honour Blade design and is again meant to represent the Klingon cranial ridges. Now as Chang is a proud military man, he would probably have a nice display stand to cradle his hilt when not in use so I designed a stand as well. It is in a black woodgrain effect with gold Empire logos on each cradle upright and on the base. The base has an orange/brown section with a triangular grid like pattern which I used to represent the scanner screens on many Klingon ships (you know the radar that shows how far a Federation ship is in Kellicams). I think Chang would approve of this hilt.

That just about wraps this week’s offering up. I apologise there aren’t as many renders this time around but I have been getting carried away with that Lego Digital Design software I showed in a previous post. So far I have built my Interceptor, a new flagship Star Destroyer, a Mandolorian Infiltrator ship and I’ve built part of the city of Theed – complete with B-1 (Roger, Roger) Battle Droids and tanks! Those will all feature in upcoming posts along with a VERY special crossguard saber based on a special Star Trek ship I have already mentioned today! I hope you will all call back to see that. In the meantime I need to say thank you for checking Chang’s saber today and supporting FTSabersite. Your visits have kept me motivated to carry on designing for FIVE years on WordPress as I just passed my Blogaversary so thanks big time! Till next time….

“Chang Saber” is a For Tyeth Editions design inspired by the character General Chang from the film “Star Trek – The Undiscovered Country” The design, model and renders where created by For Tyeth in Blender 3D and are ©Copyright of For Tyeth/FTSabersite 2016-2021. Star Trek and all names, images, logos and related material are Trademark/ ©Copyright of Paramount Pictures.

4 thoughts on ““Chang Saber” – A Weapon for a Klingon General”