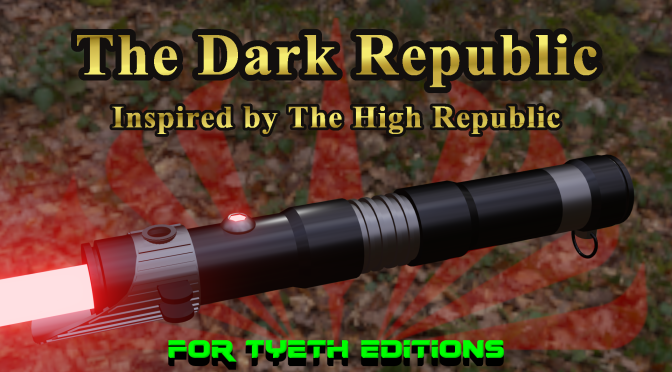 Hello Everybody and welcome to April! Today I have another hilt based on the High Republic themed saber I showcased a few weeks ago. This time it is for the Darkside users and I think is slightly elegant too. It is a variation but it will demonstrate how just a few small tweaks to the details can make a difference. You won’t believe how simple the modification was….here is the first batch of pictures – The Dark Republic….

So, instead of the splendid silver and gold scheme of the Lightside version I obviously changed the look to a monochrome black and silver – almost gunmetal colour. However you might think this is the same saber, but I rotated the hilt in such a way that the emitter shroud sweeps back and upward to almost form a scoop. This gives the hilt a more aggressive “thrusting” appearance as opposed to the flowing sweep to the rear on the lightside hilt. It also resulted in the Glass Eye window being on top of the hilt shining directly up making it more visible. I removed the Jedi emblem because of course what Sith would want that on their hilt?

Now I felt like I had only done a little work for this upgrade so I needed to put a bit more effort in and come up with a variation and so I worked on the emitter. I wanted to create a similar part and maybe add different materials to the ridges. So I made a duplicate as a back up which is always a good practice in case your mods don’t work – you have an original part to fall back on. But when I instructed Blender to make the duplicate the software automatically places the duplicate overlaid on top of the original. This meant I had to move the duplicate and when I did the thought occurred, “What if I rotate the second emitter 180 degrees to mirror the first, how would that look as a shroud?” So I proceeded and not only did the two parts form an interesting double curved shroud…it also had TWO holes for the Glass Eye feature! (As I am typing this I have just had an Idea for a new character themed version of this hilt to replace a previous design I built back around 2016! It too featured two red eyes…any guesses who it might be?) Anyhoo I had best post the second gallery with the version 2.5 of The Dark Republic…

Again a simple modification led to a neat new version. The double sized shroud now looks like some form of Sith armour plating while on the underside there lurks TWO red eyes! Not only that but the way the blade extends it appears as if there are two pointy ears (Ooh blimey another character idea just struck me! I’m designing stuff in real time now 😎). Ok, that just about wraps up this week’s design but I am going to be busy re-modding this hilt into the two new character hilts I just thought of…plus I have gone and done it again….

Yes! I have gone and bought another blaster for my collection (well two actually) and this one is called the “Stryfe” and it’s motorised so it fires “Pew! Pew! Pew! Pew! Pew! Pew!” Six shots in rapid fire instead of one dart at a time. I purchased this one expecting to get a blue, white and orange coloured version which was shown on the webstore page – but it did state I might end up with a different one…well I did, this is the Elite XD version or “OJ Orange Juice” as the Nerf community nicknamed it. This may be difficult to paint up as a Star Wars-y blaster prop so I purchased a second one and maybe it will be blue! If not I’ll still have two awesome blasters to play with 😎

Anyhoo that really does bring me to the end of this post. Thanks so much for getting this far and to all my readers/viewers thanks once more for your support. You keep calling back and help keep me designing and I sincerely hope you’ll continue to do so as I still have more sabers to show you (and it seems more still in my head!). Stay safe and well…Till next time….

“The Dark Republic” sabers are a For Tyeth Editions creation and are ©Copyright of For Tyeth/FTSabersite 2016-2021. The 3D model and renders were made in Blender 3D. “Star Wars: The High Republic” and all other names, logos, and related material are Trademark©Copyright of Disney/Lucasfilm.