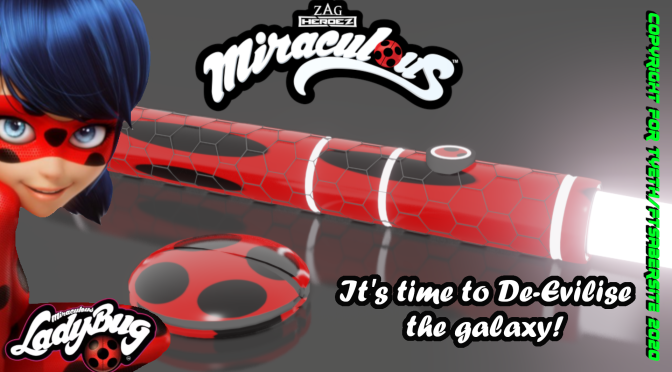 Hello Everybody, I wasn’t sure whether to post this design bearing in mind the sad news yesterday of the passing of Jeremy Bulloch, also known as the original Boba Fett actor. However I had the post lined up and the pictures prepared so I may as well post it. I will be taking a bit of a break after this for the Christmas Holidays and the fact it has been a long, very long year I need a rest. I will use the time to attempt to recharge my batteries and prepare a retrospective review post for 2020. That won’t be easy…but there were a few bright spots during the year.

But back to today’s post and it is “Miraculous” that I am able to bring this to you at all. This hilt was nearly lost when my laptop failed for the last time – luckily though, I had just uploaded copies of the files to cloud storage. So this hilt is inspired by an animation called “Miraculous – The Adventures of Ladybug and Cat Noir” and is based on the character Ladybug. In this show two young teenagers are bestowed magical trinkets known as Miraculous(es) which allow them to transform into superheroes to save the city of Paris whenever it is in danger from supervillain Hawkmoth . The two teens are Adrien Agreste and a young lady, Marinette Dupain-Cheng .

Ironically both are in the same class at high school but are unaware of each other’s secret alter-egos! They both kinda like each other too – well Marinette definitely likes Adrien but is shy. while he is more guarded and develops an interest over time. Marinette uses a pair of magical ear-ring studs to transform from timid mild mannered teen into Ladybug whenever Hawkmoth hatches a plan. Hawkmoth “infects” butterflies called “Akumas” with negative magic powers which then fly into the city to infect and transform citizens into Supervillains based on the negative emotion they are feeling. So enough chat for now, here are my first attempts at creating the “Miracle”…

The saber is simple and functional but does sport a natty red and black spotted paintjob to match Ladybug’s outfit, including the hexagonal panelling on the grip. In the show Ladybug’s costume has hexagonal texturing to it (similar to the new Superman and Spidey bodysuits) and I recreated the panelling using a wire frame which I wrapped around the hilt. The red and black paint is actually one layer of texture generated in Blender (meaning I didn’t paste images onto the model). The second object you can see is Ladybug’s yo-yo which she uses as a weapon and a tool to cleanse the infected butterflies once they have been freed and released their hold on the emotional citizen host. Ok, onto the next batch of pictures…

The yo-yo as I mentioned is used as a weapon, as a shield by spinning it and as a device to cleanse “Akumas”, it also has the power to create a “Lucky Charm” object that helps Ladybug defeat whichever villain she is battling. This Lucky Charm is usually an everyday object which when used in conjunction with other items gives Ladybug an advantage. You will notice that this version of hilt and yo-yo has a slightly altered paint job with a discrete white outline around the black dots. This came about when Ladybug received new powers later in the show and became LadyAquabug. I removed the hexagonal grip as my borrowed laptop couldn’t cope with all the details at first but the hilt didn’t look right so after a few technical tweaks I managed to force the computer to create this final batch of pictures….

So now Marinette/ Ladybug has a powerful new tool to tackle Hawkmoth with. And she will need it as Hawkmoth is determined to steal the ear-ring “Miraculous” of Ladybug and Cat Noir’s finger ring to combine their powers and achieve his goal – to obtain the ability to change reality (he does have a noble reason for this but there are complications involving Adrien and Cat Noir – but that is a story for later).

That just about wraps up this offering as I have run out of Glamour Shots! The story of Ladybug and Cat Noir runs for three series and there is a feature length special set in New York. There are many more characters and villains too so maybe in the new year there might be a few more “Miraculous” inspired designs. Stay tuned!

For now I would like to thank all of you, my friends and followers for the fabulous support you have shown to me and FTSabersite this past year. I am truly lucky to have such a following and I couldn’t do this without you. You have helped the site surpass the 25,000 views milestone last week which I am proud of. I am also proud that I think I’ve posted a design every week (or pretty close to it) and rest assured I still have more ready for next year so I hope you’ll all return for my end of year review (there may be some surprises) and all the new stuff in January. Stay safe, have a happy and peaceful holiday season, take care of each other and Till next time…..