Hello Everybody, today I have sort of good news and we return to the galaxy far, far away with a Star Wars themed design. Now firstly the good(ish) news….after spending over TWO days trying to revive my laptop I gave up sort of. I had followed the instructions on Microsoft’s site and watched YT videos (cautiously) and all my attempts failed. I left the machine alone and used a borrowed laptop to make my Brian May tribute hilt/guitar last week but I got bored. So Mrs T convinced me to try once more to try and fix it and I went through the same procedure with the Recovery USB Drive and….it WORKED sort of. I managed to install Windows again to the point where I have installed all the most recent updates (even in the short time my machine was Kaput MS released MORE updates!). This means I can tentatively use my new laptop again and I have managed to build a new staff design. It is the new double bladed weapon owned by…Darth Maul who features heavily in the new The Clone Wars season 7 cartoon. I haven’t seen the new season of cartoons so can’t give any details, I just know he is back and using a newly repaired staff lightsaber and here are a couple of WIP MatCap renders of my version of it named, Mauled CW7….

Some eagle eyed viewers/readers may recognise one end of the staff as it belonged to Maul’s lightsaber staff which was damaged in his duel with Ob-Wan and Qui-Gon in Phantom Menace. The second half of this rebuilt weapon is a lightsaber formerly owned by Aurra Sing the bounty hunter and failed Sith apprentice. 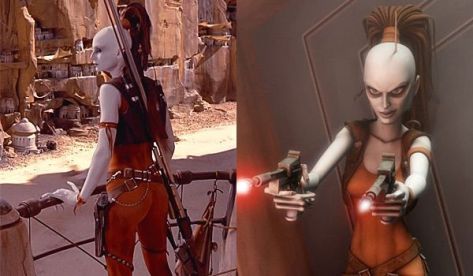 Again how Maul got this I don’t know as I haven’t been able to keep up with all the cartoons and novels that Disney have released (these fill in all the gaping holes in the plots of the films!) because I can’t afford Disney+ and all the books etc. But enough chat as always you like to see nice pictures and hopefully these new renders are back to my high levels! Here are the Glamour Shots…

Well I hope these are better! I felt bad that I had to resort to using my old setup and my output suffered but I also felt I wanted to keep active. As a result I may return to my Brian May design and re-render the images and get some proper Glamour Shots of “The Lady”. Back to this hilt, it has the half of Maul’s saber we all know and remember but the Aurra Sing half is very different! It was also very interesting to model….those holes took a lot of work. A closer look also reveals that I placed a For Tyeth Crystal Chamber inside! I am not sure how comfortable this staff would be to use with all those holes and sharp control box switch section – it would be like holding a cheese grater! But Aurra Sing and Maul seem to manage with it. However, with all that said I think I kinda like the staff, it is the first I have been able to build since my computer hiccups!

I am nearly at the end of this post and I hope you all enjoyed it. It was a bit stop start for me typing it out as I kept having to save the draft every 5-10 minutes! But I managed. You could say I FORced it to work….I’m sorry, bad joke but I have been stressed and I’m just relieved I could present this to you all. So thank you so much for checking this design out and for supporting me and FTSabersite in these difficult times. Whether you are a new visitor or one of my regular reader/viewers you are all much appreciated and in my thoughts. Hopefully you will all return for future posts which will feature new designs I have come up with inspired by Obi-Wan Kenobi….along with some other “salvaged” designs I managed to save. Till next time, stay safe and well…..