Hello Everybody, welcome back. Yesterday I posted a quick announcement of a new project I am working on based on the new upcoming The Clone Wars Season 7 show, so I only have a short post today showing something I have been working on. Recently I have been in “negotiations” with the banking clans on Earth and I have decided to enter the world of stocks and shares, commodities and ForEx! But first I would need an investment or collateral sooo I went and had a rummage around my workshop to see if I had anything of value to trade. Well low and behold something appeared in an episode of the TV show “The Mandalorian” that reminded me of some objects I picked up many many years ago and those objects looked like one of these….

This is an ingot made of Mandalorian steel which is also known as Beskar! Beskar is a very valuable (and treasured by Mandalorians) metal used to create battle armour. It is resistant to blaster fire and can even deflect lightsabers so it can be very useful making it valuable. Guess what? I found a crate FULL of these ingots buried under some boxes of lightsaber parts and I have these…. 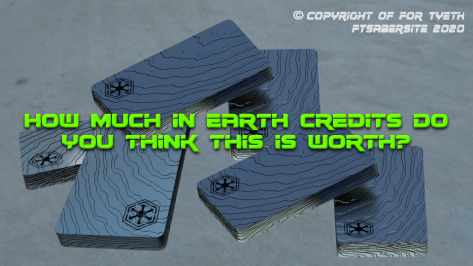 I have quite a stash and more than enough to start investing in financial endeavours….however, I have kept a few in reserve and done something special with those bars of Beskar…..I have forged a Mandalawrian Saber in solid Beskar! This very limited edition of my saber looks like this…. 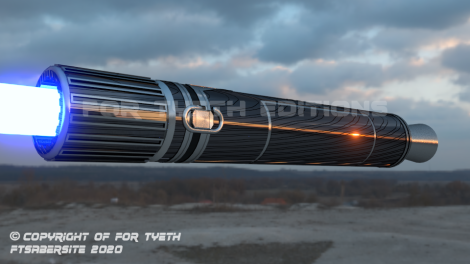 As you can see this hilt has the same texture as the bars/ingots of Beskar! And the pattern of wavey lines is known as a “Damascus pattern”. It is seen in metalworking found on Earth but has been a feature of Mandalorian metalwork for thousands of years. The metal is very versatile and can be forged, melted down to form a foam, hammered into plates, used in machinery and architecture….just about anything. So this saber has a very big advantage against other sabers….because of the properties of Beskar, it can as I mention above deflect lightsaber blades and momentarily disrupt that blade so the saber temporarily malfunctions. Imagine you have this Beskar hilt and your opponent makes contact with their blade on your hilt…their blade would shut down giving you a short time to counter attack. Your saber would also be less likely to get chopped in half! I kinda like this saber but I have other new stuff lined up so I will give you all a bit of a sneak peek.

As I posted yesterday I have modeled the new saberstaff seen in the trailer for The Clone Wars and one half of the staff is the remaining half of Darth Maul’s famous double bladed weapon, and the second half is made up of a saber owned by a former Sith named Asajj Ventress! You may have seen her in the Clone Wars cartoon as she was an apprentice of Count Dooku. She used twin red curved hilts but she also used a yellow regular saber hilt too. And I have modeled that to construct the new Maul staff I posted yesterday. Here is a pre-render preview of my progress on this Ventress hilt so far…

There are a few tweaks I need to make but I feel this is a solid basis to improve on. I will feature this and an article on Ventress in a future post complete with Glamour Shots and maybe an animation! So that just about wraps up this post and my Beskar build, I hope you liked it, I think it is quite distinctive.

Thank you all for looking in on this design and for supporting me and my site. As always you are much appreciated and I am proud to say my viewing stats are rising meaning word of my efforts is spreading so thanks if you have told friends and family or social media about FTSabersite. I have more new designs to bring you including a couple of curved hilts, a saber that nods to Obi-Wan Kenobi and I may have a tribute to an upcoming movie with a beautiful sword! I sincerely hope you’ll call back to see those. Till next time…..