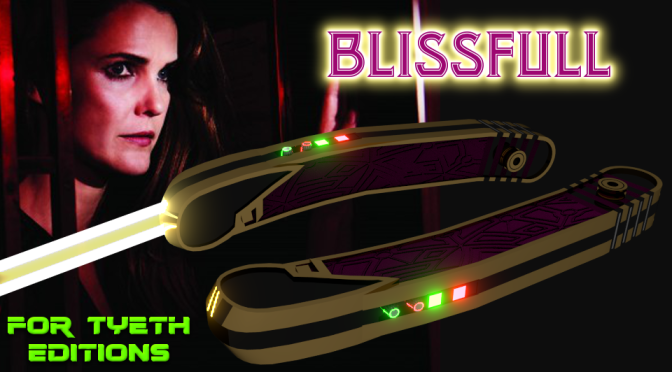 Hello Everybody, today I bring toy you not one but TWO new hilts, well a matching pair of sabers for a mysterious female character who will appear in the new Star Wars film The Rise of Skywalker in about 2 week’s time! (Wow time has flown!) A while ago Vanity Fair released some promo teaser images and one was of a mysterious woman dressed in a burgundy and gold bodysuit and helmet. The outfit immediately reminded me of a few things…first was Daft Punk because of the helmet but I also remembered a movie and tv show with rocket/jet pack wearing characters. The TV show was an old Saturday morning cinema style serial called “King of the Rocket Men” from 1949. The movie came out around 1991 and was called “The Rocketeer” made by ….Disney! Both lead hero characters wore rocket packs and distinctive helmets. Here is the poster for the Disney film…

The movie set around the 20’s/30’s has a distinct Art Deco style and look to it, but it is that helmet just look at it! Now take a look at the Vanity Fair image of Zorii Bliss and her helmet…look familiar?…..

Ok, it is a little bit more futuristic with the paneling and air vents/radiator parts on the back but that looks spookily like the Rocketeer. Zorii also has what looks like art deco styled patterns on her belt and bicep bands. I saw this and just knew I needed to create a hilt for this character. So I set to work and came up with this hilt… 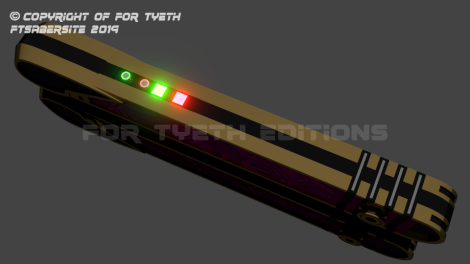 I really went to town with this design and used the burgundy of the suit as the handgrip and added the antique gold and gloss black accents. The emitter is modeled on Zorii’s helmet viewed side on. The switches I made to look like the old rotary dial controls found on 1930’s/40’s radios to fit the art deco look. The pommel looks like the decorations found on pillars and columns of art deco buildings with the geometric carvings. I was pretty stoked and happy how these turned out but I had only seen a picture of Zorii from the waist up and a new image was released (the one above) that revealed Zorii had two curved handled blasters. I liked those blasters and thought “How would this saber look if it was curved?” So you know me….I bent the saber! Here are the pictures of the update…

I used the same function in Blender 3D that I used to bend my Aquaman Bend Lightsaber hilt. I had to create “cuts” in the hilt then draw a curved line which the software then maps the model onto and bends the shape to the line drawn. Anyhoo, you may have noticed that in the last picture there are TWO hilts and you would be correct. I modeled a matching saber to form a pair (and I mirrored the second hilt so each one can hang off Zorii’s belt like a pair of pistols). Oh yes and did I mention that the mysterious Zorii is portrayed by Kerri Russell? That is why you can see the actress in the title image above! And as these hilts were for such an intriguing character I decided to add one final  touch, an embossed pattern to replicate the mysterious geometric art deco designs on the handgrips too! Here is a final batch of images of the matching pair…

I forgot to mention that I added a yellow “Darksaber” style flat blade to match the flat rounded rectangular shape of the hilts’ cross-section. Phew! That was a lot of images again but I think I have covered everything now. Not a lot is known about Zorii except for the facts she is a human from the planet Kijimi and was the leader of a gang known as The Kijimi Spice Runners….and has a past connection to Poe Dameron! We will find out more when Rise of Skywalker hits cinemas on the 20th of December (UK date).

I am nearing the end of this post, but before I go I need to say a big thank you to evrybody who has visited and supported me these past three and a bit years, I have now passed the 15,000 views mark. So thank you all, new viewers and all my regulars you are fantastic and much appreciated. I hope you enjoyed these hilts and really hope you will return for future posts as I have my final Master Series hilt coming up along with a whole batch of new original designs and I’ll be chatting about the new film. Till next time…..

“Blissfull Saber” and “Blissfull Bend Saber” are For Tyeth Edition designs and are ©Copyright of For Tyeth/FTSabersite 2016-2019. “Zorii Bliss”, “The Rise of Skywalker” and all other Star Wars related names, images and material are Trademark/©Copyright of Disney/LucasFilm. Promo image Copyright of Vanity Fair.