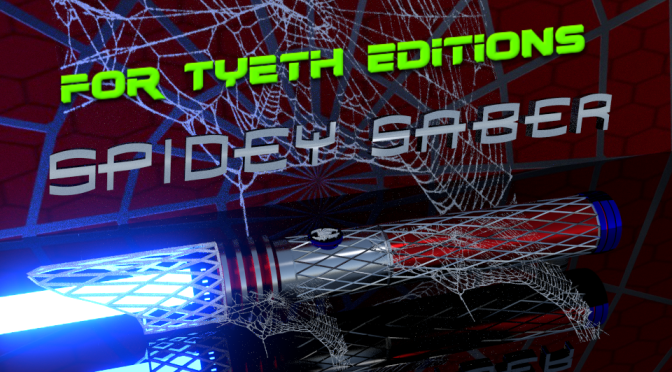 Hellooooo Everybodies! Today I am looking back to a Halloween when I got dressed up as my favourite superhero…Spider-Man! I was a youngling at school and one year we had a Halloween Fancy Dress Disco. I got my dark blue jogging suit, a pair of bright red football socks, an old red T-shirt, a red balaclava, some sunglasses and a big black marker pen then set to work making my costume. I cut out different shapes from the t-shirt which I stitched onto the jogging suit to represent the torso pieces of Spidey’s outfit and I drew a web pattern on them with the marker pen. I did the same to the socks and balaclava. I used to wear spectacles as a kid and had clip-on sunglasses so I used those to make the mask lenses. I even had paper party streamers to recreate Spidey’s web shooting trick! I came second in the competition! But Spidey has always stuck with me and this Halloween I figured I’d brush the cobwebs off a saber dedicated to our favourite wall climber and here it is…

Ooh what’s that living in the emitter?…SPIDER!

I have attempted a Spider-Man themed hilt before when I used the old software I had access to but I always felt I could do better and hopefully with this hilt I have. I modeled it in the classic Spidey red and blue colour scheme with nice silver accents and webbing. And the webbing is particularly interesting on this model as it isn’t just a graphic representation, it is actually 3D modeled! If you zoom in on the pictures you will see the web is actually raised ribs. This I achieved by making a wireframe as you can see with the emitter shroud then I thickened the wires that made up the frame. This made the wires look solid. I also added a few webs located in the pommel and the emitter. Both the pommel and the protective Blade Plug decoration have a web with a Spidey logo seated in the middle, again all 3D modeled. I wasn’t sure which looked better, the hilt with the emitter shroud or without so I posted both as the saber without the shroud was part of the development of the design (but could be a stand-alone design). And you may recall I mentioned I was a fan of things being balanced? Light and Dark, day and night, Good and Evil? Well Spidey had a run in with an evil “clone” of himself in the form of a parasitic alien that enveloped him. Peter Parker managed to escape from the alien but the creature found a new host in a guy named Eddie Brock and became known as “VENOM”! Well…as it’s Halloween here is a taste of Venom!….

Venom had the look of Spider-Man but was black and silver in colour and had big eyes and sharp pointed teeth, he was also sort of elastic and could stretch and change shape as if made of liquid rubber. So I gave the Venom version of this hilt a glossy black base colour and silver webbing accents. To really make the “Venom”stand out from the “Spidey” version I gave it a toxic green blade.

Now, you remember I mentioned “brushing off the cobwebs” above? I wasn’t kidding, take a peek at this image I made and have a look at the cobwebs clinging to the backdrop and the saber…I modeled those too!

Those webs get everywhere, are very sticky and took me forever to sweep them away 😀 ! But I think I have tidied this design up nicely and that just about brings me to the end of this Halloween special. I’d like to thank you all for checking out this design and for supporting me and my site. And especially to the kind viewers from Spain who have dropped in recently (I noticed your visits!) Thank you so much it’s much appreciated, whether this is your first visit or if you are a regular visitor. Till next…….WAIT! This is Halloween and you really need a fright so I ‘ll leave you with an old picture I posted three years ago….It’s ME!…Happy Halloween Nightmares!…. 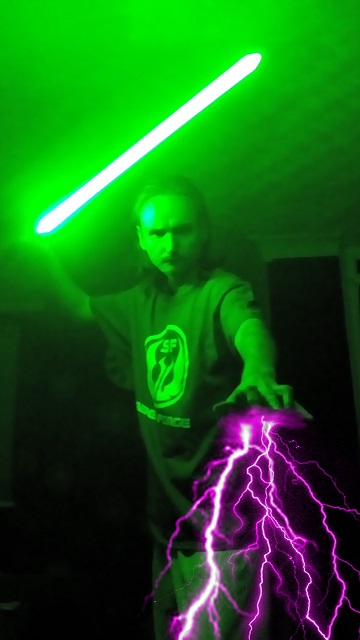 P.S. As I am posting this earlier than normal I think I will have a rest over a long weekend so there won’t be a post this Saturday but rest assured I’ll be back next weekend for more saber shenanigans. Till next time….

“Spidey-Saber” and “Venom-Saber” are For Tyeth Editions creations inspired by Marvel Comic’s and Stan Lee’s characters. The sabers are ©Copyright of For Tyeth/FTSabersite 2016-2019. Spider-Man, Venom and all other related names, images, logos and material are Trademark/©Copyright of Marvel and Sony Studios.

11 thoughts on ““Spidey Saber” a lightsaber in a Halloween costume”