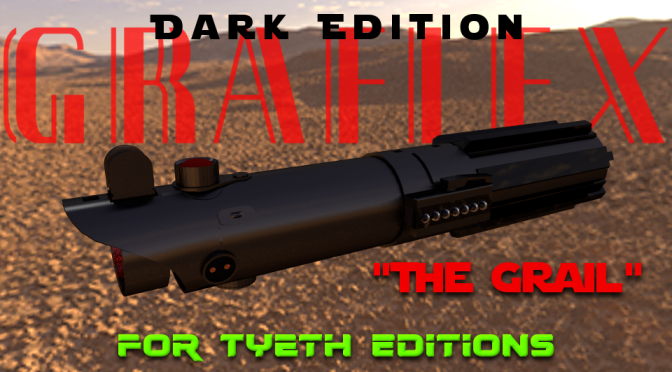 Hello everybody, well we had quite an exciting week with the release of the final trailer for the final Skywalker saga Star Wars film, Rise of Skywalker! And what can I say? It’s certainly not guaranteed that there’ll be a win for the Lightside….I have to say the trailer’s scenes looked pretty dark and gloomy….:(  But that got me thinking, with a lot of my designs I try and bring you a “Lightside” and a “Darkside” version of each hilt and as I posted the iconic “The Grail” Graflex Lightsaber model I built which is definitely a Lightside hilt….what would the Darkside sibling look like? I decided to have a look and created some new dark material textures and came up with the shadow version…The Grail Graflex DE (Dark Edition)….

As you can see this saber looks very stealthy and sinister just by changing the texture. I managed to create a slick gloss metallic texture that didn’t create a lot of speckles in the rendered images. It is suitably dark but still allows detail to be seen. And you might have noticed I have a picture showing the underside of the emitter which has a red “Eye. This is a small window that is part of the flashgun and is located just below the emitter and was the Light Level Meter sensor aperture called the Graflex “Glass Eye”. When the flashgun was modified by fans when they built their own replicas, they discovered that the blade shone out through the eye. A nice little feature I forgot to mention in my last post. Here is the photo of the Graflex attached to the camera and you will be able to see the small round hole beneath the reflector dish and bulb socket… 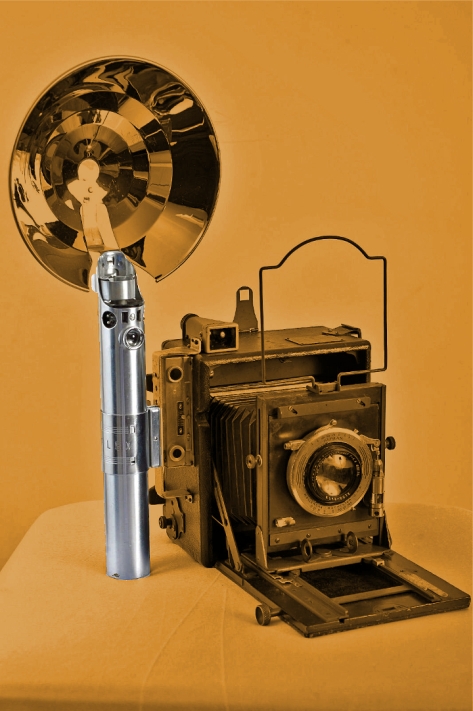 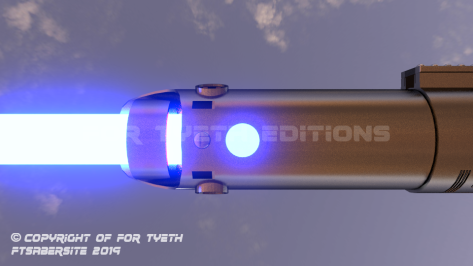 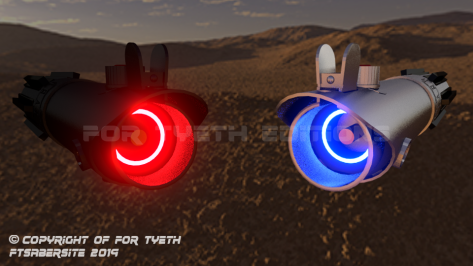 I posted the Lightside Grail hilt on the Ultrasaber’s forum and it was warmly received with some members leaving nice comments on how much detail I had managed to capture in my model. I think they were quite impressed. Because I created the mirror image picture above I thought I would do a side by side comparison of my model with a real life replica image… 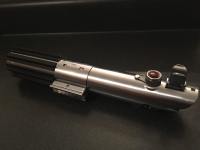 I think I have done OK considering this was the first Graflex I have built! However, not only did the members of the forum compliment my model, they also provided suggestions for other variations. One member had the idea of adding red accents to the hilt such as the ridges of the handgrip, so I like to tinker and I modeled a full “Sith” version for pure evil Force users…and here it is….

I modified the T-Grip ridges and coloured them a deep red, just like dried blood and as a nice bit of “Sith Bling” I illuminated the activation switch. You may recall I mentioned the switch is actually the display screen from an old pocket calculator. Well the screen would have lit up when the calculator was powered on and so the screen part works fabulously when it is backlit!

And once more that just about concludes this design. However, the story doesn’t end here for the Graflex, as it appeared in the second Star Wars film, The Empire Strikes Back (ESB)…but it looked slightly different and as such I have modeled the variant from ESB and I also have the versions that appear in The Force Awakens and the new film Rise of Skywalker….all coming in upcoming posts! I hope you will return to see those but for now as always it’s thank you time. Whether you are a first time visitor or a regular viewer thank you for your support and looking in on this post. If you liked what you saw then please spread the word about FTSabersite and join me again next weekend for another new model. Till next time….

“The Grail Graflex Dark Edition” is a For Tyeth Editions model and is ©Copyright of For Tyeth/FTSabersite 2016-2019. It is inspired by the Roger Christian designed Lightsaber prop seen in Star Wars – A New Hope. “Star Wars” and all related names, logos images are Trademark/©Copyright of Disney/LucasFilm.