Hello Everybody, today is a big day because I have decided to showcase the first of my “Master Series” models! And the first one up is the hilt belonging to Anakin Skywalker in the movie Attack of the Clones! (Ep.2). I built this model way back when I made my “The Destined One” hilt for Vader but it was just a solid model. I also made a small mistake in the shape of the emitter as I based it on one of Vader’s hilts but Anakin’s is much more sleek so I remodelled it. Here are two pictures of my first attempt you may have seen in my “Upcoming Sabers” posters I posted a few months back…

I wasn’t happy with the accent LED lights on the side of the saber either, so a rebuild really was necessary. I decided to tidy up the interior of the model and reshape the emitter and replace the LEDs. And as this is a special saber I thought “let’s give it some WOW factor while I’m at it!” You have seen sabers I have modelled that have “crystal chambers” but this one has what is known as a “crystal reveal”. But before I show you what a “crystal reveal” is I will post a couple of studio pics and the remodelled non-reveal pictures… 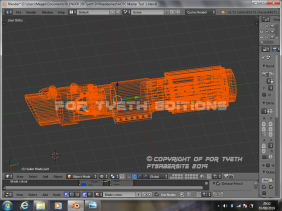 The hilt has a D-Ring to hang the saber from a belt hook, and just below are two control knobs used to alter power and blade settings. These may look familiar as earth objects as the prop makers used electrical components called “terminal post screw and caps” which consisted of a threaded post which you wrapped bare copper wire around then you screwed a thumbscrew to fix the wire in place. They make great detail parts. The emitter has also been reshaped, and the LEDs improved. And did you see the crystal? No?….Oh I forgot….I need to do the big reveal!

What is that glow..Wait what’s happening?

The saber is opening up!

I said this hilt was a bit special, not only does it have a crystal…it has TWO crystals and the saber unscrews to slide open to reveal them all lit up! I made the crystal chamber parts as interchangeable modules which fit inside the model (this was why I had to “tidy up” the interior so they would actually fit inside). The two crystals have special functions in Star Wars lore, the one in the handgrip helps power the saber while the one in the emitter helps “focus” that power into a blade.  I also went to town and added quite a bit of tiny detail into these modules as you can see in the following pictures… 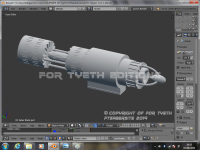 The core of the Vengence Saber studio shot

The core of the Vengeance Saber rendered.

This weapon as I mentioned, is the hilt Anakin owned in Ep.2 and has a sad legacy as it was the weapon he used to slay the Tusken Raiders in retaliation for the death of his mother, Shmi, at their hands. The quote above in the title image comes from the film where he describes his frustrations and actions to Padme on Tatooine. This moment in the film was the tipping point where Anakin became more like his alter ego Darth Vader. He took out “Vengeance” on the Tusken Raiders and hence my saber model’s name.

This just about wraps up my first “Master Series” offering and I hope you liked it. I am always trying to push my modelling skills and this hilt really tested me. And I couldn’t just build one so I have FOUR more “Master” hilts to show you in the run up to The Rise Of Skywalker. I hope you will return to see those (and many more) designs in future posts. Plus next week I will be joined by a very talented artist with the nickname “PsychoSith”. Thank you so much for checking this saber and post out, your support is always amazing and is much appreciated. Till next time….

“Vengeance Saber” is a For Tyeth Editions design based on Anakin Skywalker’s hilt from the movie “Star Wars Ep.2 Attack of the Clones” and is ©Copyright of For Tyeth/FTSabersite 2016-2019. “Star Wars”, “Attack of the Clones”, “Anakin Skywalker” and all other Star Wars names, logos, images and related material are Trademark/©Copyright of Disney/LucasFilm.