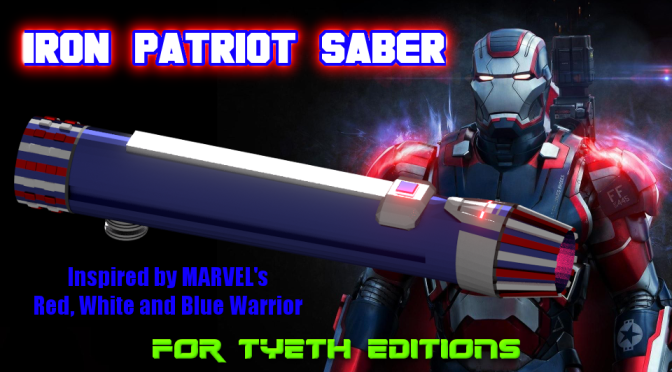 Hello Everybody, well this is strange posting on a Wednesday but I have BIG things lined up for this weekend with my new Thor inspired hilt I have battled to bring you. However first I have to post this third and final design inspired by Marvel’s character Iron Man, or rather in this case the War Machine variant known as Iron Patriot. In previous posts I briefly explained how Tony Stark the billionaire businessman was critically injured in the jungles of Southeast Asia and had to build an iron suit to help save his life. The suit was later modified and rebuilt in many variations and Tony even built a second suit for his close friend James “Rhodey” Rhodes, who wore the suit and became known as War Machine. In the comics and films the two histories are slightly different but in the Marvel movies War Machine was created to help Stark battle against a horde of automated drone battle suits and a villain known as “The Mandarin”. Due to circumstances Rhodes “stole” the War Machine suit and it was repainted in a rather “patriotic” red, white and blue colour scheme and renamed…”Iron Patriot”. This is my Mark For-T (40) Saber saber in Iron Patriot colours….

You can definitely see this is my Iron Man hilt but the colours just make it look so much different! Luckily I didn’t have to change the colour of the switch, blade or the blade plug in the emitter as they worked quite well with the blue and white. Some folk may think this scheme is a bit gaudy and looks like a big top circus tent but it is based on the suit as you can see with this colourful picture… 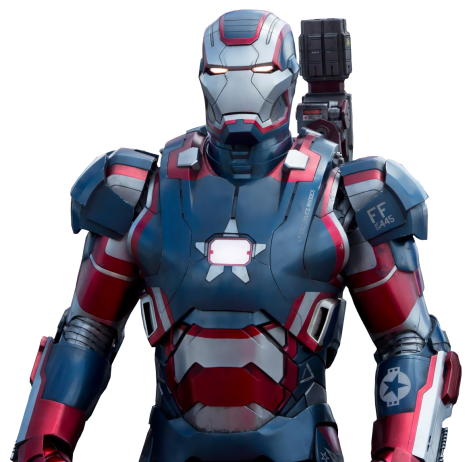 I did miss out the military markings but I hadn’t learnt to use transparent textures when I built this model, however I think it resembles the big iron clad guy quite well even without the marks!

You may recall I said that Iron Man and War Machine made a formidable team, almost unstoppable? Image if all three armoured heroes got together and formed a Marvel Tag Team…it might just look a little like this….

All three in one place! Iron Man, Iron Patriot and War Machine side by side in my collection. Phew, that was a lot of metal to manhandle into position but I think I have just about covered this series of characters and hilts, I hope I have done them justice.

So…next up is my long promised Thor inspired hilt and it just happens that Marvel are releasing the last Avengers move named Avengers: Endgame on April 25th, in which Iron Man and Thor star so I couldn’t have timed it better. I hope you will return to see this new hilt as I am really excited about it. For now I have to say a big thank you again to all my viewers and followers, new and regulars for all your support. It means a lot to me. Till next time…..