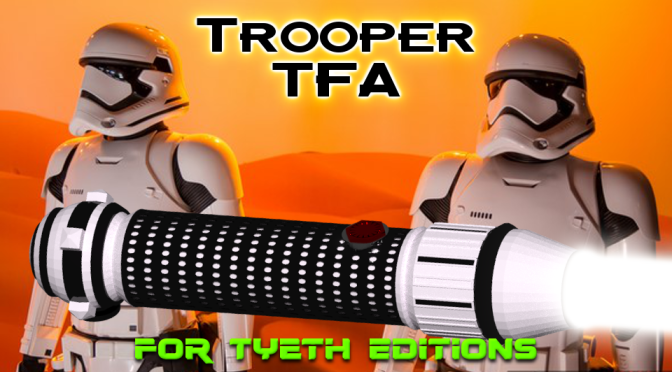 Hello Everybody, today I park the Starsky and Hutch Saber back in the workshop and have another Stormtrooper inspired hilt to bring you. This time it is designed for the troopers of the First Order and came about after I watched The Force Awakens and saw the “duel” between the trooper called “Nines” and our new Rebel Stormtrooper, Finn. In that fight Nines had a weapon called the Electro Riot Control Baton, an extendable baton similar to the side handled batons used by today’s police forces. The difference being the Electro Baton had an energy blade and so Finn had to use the Graflex lightsaber he was recently given to look after. I thought “If troopers had energy batons, why not the lightsabers that Ralph McQuarrie envisioned from George Lucas’ story?” Well I explained the reason in my original Trooper Saber post but I still wanted to know what a First Order style lightsaber might look like and I set to work…sort of! 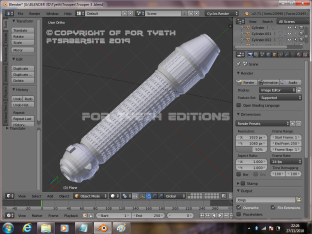 I will be honest, these are identical to the original Trooper hilt design as this TFA version is a “repainting” rather than a redesign. However it did teach me a new trick (as I am still trying to learn something new as often as I can). That trick was in regards to applying “layered” textures but more on that later in the post. I didn’t realise but the handgrip which I created with the perforated holes would work perfectly for the Fist Order styled design. I used the perforated grip purely for ergonomics on the original design but upon studying the new costume and helmet for the First Order Stormtroopers (updated by Michael Kaplan) I noticed that the recessed black parts of the helmet had a honeycomb like pattern of dimples moulded into the material. It dawned on me I could apply a black colour to the grip and it would look similar to the parts on the helmet! Anyhoo, I had best display a few more pictures so you can see for yourself…here’s the Glamour Shots…. 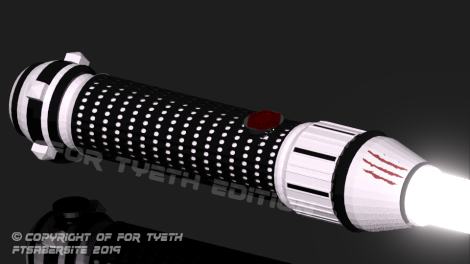 So, by altering the balance between the black and white parts of the saber, I was able to make a more modern looking version of the Trooper hilt. Just like Michael Kaplan did to John Mollo and Ralph McQuarrie’s original Stormtrooper costume. The pommel has more accents as does the emitter with black panels and rings added. The handgrip has the new black contrast and is more obvious now the white hilt body shines through the perforations. The saber does have one new feature and that is a First Order logo activation switch! And some of you may have noticed the hilt pictures with the “bloodstains” on the emitter? Well those are the FN-2187 version of the hilt that belongs to Finn. The bloodstains are to represent the handprint smeared onto his helmet when his comrade died during the attack on the village on Jakku at the beginning of The Force Awakens. 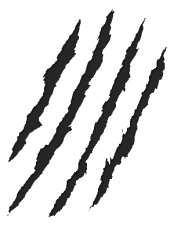 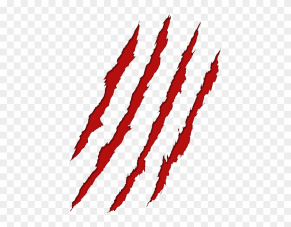 These bloodstains are also the new “layered” textures I mentioned. In Blender there is a function to create graphics to look like materials such as glossy, matt or Aluminium textures to apply to your models, but it also has a feature to allow the user to apply layers of semi transparent images as well. This is similar to adding decals onto scale model kits but it is a little tricky to position the graphic accurately. The two images above show the original scratches in black and white and the second image I coloured red and made transparent – this image I applied onto the model. Using this technique I will be able to add all sorts of insignia and logos onto future models!

Well I think that just about wraps up this week’s offering, I hope you liked the new updated Trooper. I have two more versions for another post and one of these is based on an as yet unseen Stormtrooper who may be in the new Episode 9 Star Wars film. So I hope you will return to see those as well as my new Exo-Suit inspired hilts for a couple of Marvel heroes…and my new REBUILT Thor crossguard and shoto hilts! But for now I have to say a big thank you as always for your visit today and the continued support I have received, whether a new visitor or a regular viewer/follower you are much appreciated. Till next time….

“Trooper TFA Saber” is a For Tyeth Editions design and is ©Copyright of For Tyeth/FTSabersite 2016-2019. “The Force Awakens”, “FN-2187/Finn” and all othe names, logos and related material are Trademark/©Copyright of Disney Studios/LucasFilm.