Hello everybody, today we stay in the Star Wars Universe but travel this time into the genius mind and world of Ralph MacQuarrie – the world famous concept artist who created the “look” of Star Wars. Ralph MacQuarrie’s works could hang in any gallery and I find them fascinating, whenever I see one of his pictures I stop and study it. There were character designs for Darth Vader complete with battle armour and helmet/mask making him look like a space Samurai, there is an image of two droids walking on a sand flat…then there are the pictures of the Stormtroopers! We all know the Stormtroopers now, the shiny egg-shell white armoured foot soldiers but did you know they were supposed to have lightsabers in the beginning? Originally, George Lucas envisaged everyone would have “Lazer Swords”, the good guys, the bad guys and Stormtroopers! Mr MacQuarrie produced an image of two corridors, one with three Rebel fighters and in the adjoining corridor a group of troopers…the one nearest to us wielding a pure white plasma bladed lightsaber. However you can’t quite make out the hilt itself except it is short, so I decided now I have Blender to release my creativity, I would design a hilt that the Stormtroopers may have hung on their belts. This is Trooper Saber…. 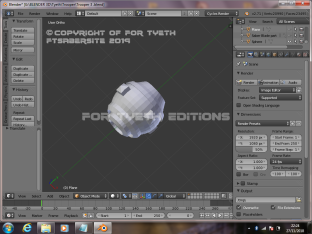 I took the approach that a saber for a trooper would be functional, compact and based off the image (seen in the title image above btw!) it would be similar to a hilt known as a Shoto. Shoto hilts are predominantly single handed weapons used in your non dominant hand as a defensive weapon. They tend to have a shorter blade too but I kept a regular blade as you will see later again in keeping with the image. The pommel I took inspiration from Obi-Wan Kenobi’s saber from The Phantom Menace, which according to sources houses an additional power cell. This saber just has a speaker vent but it does share the round skull-crusher style and the turrets or blocks around it’s circumference. The handgrip I made from two sections, an inner core and a perforated outer sheath/sleeve. I imagined that this outer sheath would be some sort of rubberised/textured material as this is a tactical weapon and grip would be important. Ok I have tattled on and you have still to see some Glamour Shots of the saber so here they are… 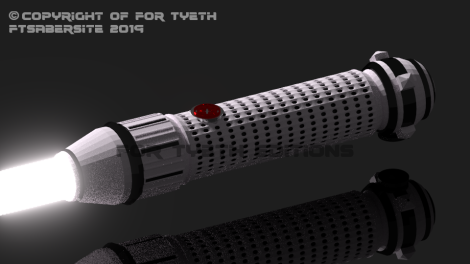 I think this design worked out ok (it is a slightly older design but it still checks out sir! 😀 ) I replicated the eggshell white colour of the troopers’ armour and accented sections in black to mimic their equipment belts (such as the ring of panels around the emitter). The handgrip again is in white but to avoid the hilt being lost in one colour I used black as the inner core so it can be seen through the sheath holes. The activation switch however is a bit special as it is modelled on the Imperial Cog logo which sometimes is displayed on the shoulder plates and pauldrons troopers wear. To finish the hilt is the pommel which as I mentioned earlier is loosely based on Obi-Wan’s saber but it also shares the spherical motif that the Empire employed. The Death Star was spherical, the fuselage of the Tie Fighter (more on this later) was spherical and so too is the pommel of this weapon! And the blade of this weapon is pure plasma white as Ralph Macquarrie imagined. Later rewrites of the story would replace the white blades with Blue ones for the good guys and Red for the bad guys…and the Stormtoopers got….Blasters! So uncivilised!

I suppose in a way it made sense that the lightsaber be withheld for the main special characters and not just everybody, it instilled the weapon with a sense of mysticism but it might have been fun seeing hordes of troopers with lazer swords…and I could have supplied them! But sadly that is another story and it is also time for this post to end. But as always before I go, I have a few bits to let you know about. I still have at least TEN more hilts to show you all (and maybe a Tie Fighter themed one) so I hope you will all return to see those in futures posts. And I have to say a big thank you to a gentleman named Lord_S_Gray from the Ultrasabers’ forum who kindly commented on my Satele Shan hilt that I “had truly recreated the weapon of a Jedi”. That means a lot. So to end I will say thanks to you my viewers and followers new and regular for all the support and kind words. Till next time!

“Trooper Saber” is a For Tyeth Edition design and is ©Copyright of For Tyeth/FTSabersite 2016-2019. The Stormtrooper concept art is Trademark/©Copyright of Ralph MacQuarrie/LucasFilm 1977-2019.