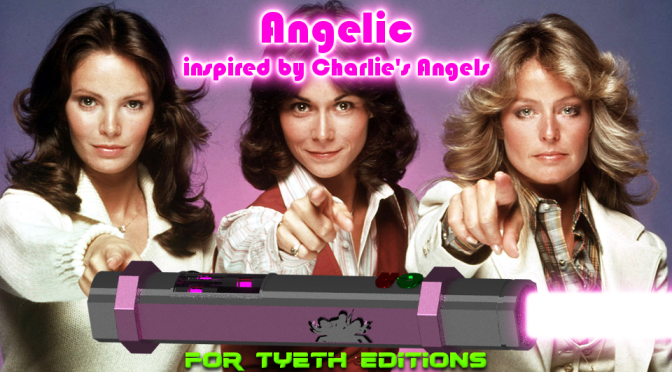 Hello Everybody, to start this post I need to retell this quote – “Once upon a time, there were three little girls who went to the police academy. And they were each assigned very hazardous duties but I took them all away from all that and now they work for me. My name is Charlie.”  Now you may be wondering what Charlie’s Angels has to do with Star Wars or sabers? Well both were released at about the same time in the 1970’s and both had great toy merchandising. And it was my good friend, TheVintageToyAdvertiser, who challenged me to design a Charlie’s Angels themed hilt for our on-going movies and TV series of hilts and articles. Then he suggested I base my design on the customised panel van the Angels used in the show! This was a challenge but here is the results of my efforts…\\Angelic//… 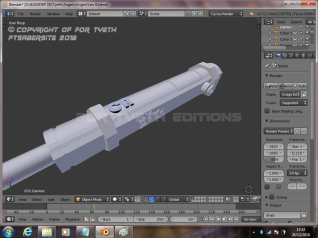 The Angel’s van at top of image!

I have made hilts based on cars before, but a panel van was something totally different. They are BIG and BOXY and not exactly streamlined so I could mimic it’s lines in a hilt form. So I went for a chunky utilitarian shape with extrusions to represent wheel arches, large flat faces for the panels and in the texture test image you can just make out a transparent area to form a skylight sunroof detail. Within the third picture (kindly supplied by TVTA) you can see the Angels’ van at the top. It has a solid bright pink colour which I thought was a little much for a saber so I used a painting trick found on modified custom cars and used a subtle dusky pink and silver finish. I think it worked ok but as always I’ll let you decide with a few more Glamour Pictures…

Activation buttons-Green on! Red off!

And the iconic Angels’ Logo silhouette

These close up pictures show a few more of the details including the accent groove around the emitter and the octagonal blocks to mimic wheel arches. The activation buttons are the initials C and A for Charlie’s Angels with green to switch on and red for off. The letters are in a 70’s style font named Bauhaus (I also used this font in the header image!). The top views also reveal the sunroof/skylight detail of the van. However, where the van had two or four panes (depending on which toy you had) I used one panel to form a crystal chamber. Within that chamber are three crystals – one for each Angel. This feature I added instead of the suggested van rear doors and equipment rack. Finally I had to include the famous “Angels Silhouette” logo so I made a silver logo plaque and outlined it in black to give it some pop. 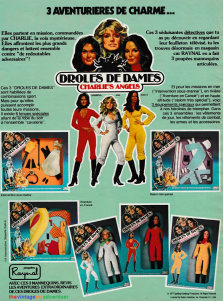 Kelly, Sabrina and Jill – the Angels

Charlie’s Angels was produced by Spelling-Goldberg Productions and ran from 1976 to 1981 over 5 seasons and did feature other actresses as the line up changed but I focused on the “Classic” trio here. Hopefully I have done justice to the them (and their van!)

That just about wraps up this case but I need to thank TheVintageToyAdvertiser for his “challenge” and for supplying the additional toy adverts. I think he has a Super Hero challenge for me next which will be interesting. (And please be sure to visit TVTA’s site and check out his fantastic images and scans of nostalgic toy and game adverts). I hope you will all return to check that one out in a future post along with my series of Trooper hilts and a new Crossguard hilt for a famous God! Thanks for your support whether you’re a first time visitor or long time regular, you are appreciated. Till next time….

“Angelic” is a For Tyeth Editions design and is ©Copyright of For Tyeth/FTSabersite 2016-2019. “Charlie’s Angels” and all names, images and related material are Trademark/©Copyright of Spelling-Goldberg Productions and was distributed by Columbia Pictures Distribution.