Hello Everybody, I have a quick bonus post today as I have recently been working on a design inspired by a talented storywriter I have met on the Ultrasabers’ Forum you may have seen me mention. One member, named Lady Revan wrote a piece of Fan Fiction based on a Star Wars computer game. The game is a first person style RPG with missions and objectives…oh and you have to build a lightsaber! Well Lady Revan’s story includes a character named “Alex Khaar” a Jedi Knight who joins forces with a female Jedi (Halin Chan) who vowed to protect her homeworld. This however brought the pair into conflict with the Jedi Council. In a passage of the story Alex Khaar is teaching some youngling Jedi learners, but all the children could do was ask him questions about how big he’d grown. Now I know Alex is BIG….so I decided to design a hilt for him based off this very limited description! This is what I came up with, this is “Khaarnage“…. 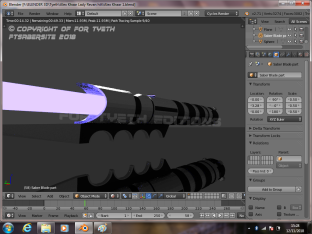 As I mentioned Alex was described as BIG and so I felt he would need an equally powerful lightsaber. This I accomplished by giving it an aggressive forward looking claw, complete with integrated indentations to assist grip when performing power strikes. This is however still a weapon of a Jedi so can’t be too evil looking so I kept the colour scheme of the hilt as classic silver with black accent highlights. It also has the Jedi blue blade and a matching lit activation switch. The banded lower grip section allows Alex to use this hilt two handed as well as single grip. The hilt is finished off with a skull-crusher style pommel used as a counterbalance weight. However, there is a neat addition of a D-Ring loop used to attach the hilt to a hook on your (or Alex’s) belt. But of course if you are a big guy then one blade may not be enough for you so….how about TWO blades! 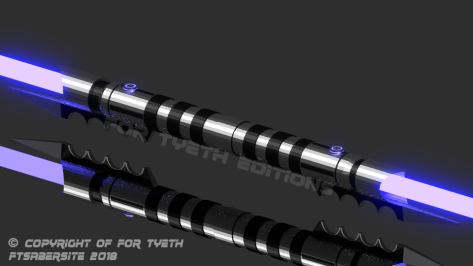 I removed the pommels from two hilts and screwed the two sabers together and made a Darth Maul style lightsaber staff!

I posted this design on the Ultrasabers forum as I now have a sanctioned Gallery section on their forum (Thank you Ultrasabers!) and it was warmly received by it’s members including Lady Revan herself (thank you LR!) The link to this saber on Ultrasabers’ SaberForum.com is here:

Well this just about wraps up “Khaarnage” except to say I have also built Darkside versions of this saber and staff which I will display in a future post. I will have to finish here because I am also posting a SECOND post today where we will be going “retro computer ganing” and paying tribute to a fantastic 1980’s film! Thanks to everyone who checked in on this design and I hope you will call back for part two of today’s posts. Till next time…..

“Khaarnage – a saber for Alex Khaar” is a For Tyeth Edition design and is ©Copyright of For Tyeth/FTSabersite 2018.