Hello Everybody, today I am bringing you a hilt that is sort of basic compared to the hilts I have created recently and bearing in mind the progress I have been making. I do however have a good reason. This hilt was one of my “test bed” models I worked on to learn the basics but whilst building it I got sidetracked by my TY Silencer. As a result I never posted this saber based on the Resistance’s troop transport/gunship, the UT-60D U-Wing fighter! I will show you the usual Work In Progress pictures and Glamour Shots, then I have BIG news concerning next week’s post. So first off here is UT-60D Saber…. 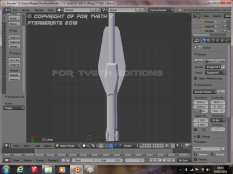 This saber taught me how to make duplicate parts, inset panel sections, bevelled edges and was the first hilt I made with the faux cockpit section which lights up. The lit up cockpit later appeared on my TY Silencer hilt. Structurally, the saber features twin “wing blades” one either side of the plasma light blade. These represent the variable geometry wings (swing-wing) design of the UT-60D in the forward position. The cockpit forms the emitter and houses the blade socket which has transparent windows to allow the cockpit to light up. The handgrip features recessed gripping areas that mimic the travel/cargo cases the UT-60D transports. It also leads to the pommel that has four engine modules placed at each corner just like the Incom spaceship. Look closely at the engine pods and you will see my early attempts at mechanical detailing. A Covertech knob on the underside of the pommel allows it to be hung from your belt. That covers the structure of the hilt but it needed a paint job so I though a nice factory fresh blue and white would look good. Here are the Glamour Shots….

I added the blue along the bevelled edges on the wings and the inner panels in a layout I thought would be plausible. I am a big aviation fan and had seen a real Earth aircraft in a similar scheme. The grey, I thought made a change from having black contrast and it makes the overall look seem sportier.

Now that just about wraps up the UT-60D Saber Blender Version. I just have time to tell you about a bit of exciting news! Next week I am going to be posting in collaboration with a fellow blogger for a spooky Halloween Special! The reason I didn’t have a top notch hilt today is that I have been hard at work on a very unique saber for this next special post. The saber will have a connection to the subject of my friend’s post so we have a Crossover! I hope you will join me and …My Mystery Guest…for our next post. Hopefully it will scare the socks off you all  😀 !

Of course before I go I’d like to say thanks for visiting today and supporting me and my site. Whether you are new or regular viewers, you are all appreciated. Till next time…..

“UT-60D U-Wing”, “Rogue One” and all other Star Wars related names, logos and images are Trademark/©Copyright of Disney/LucasFilm. The “UT-60D Saber Blender Version” is a For Tyeth Editions design and is ©Copyright of For Tyeth/FTSabersite 2016-2018.