Hello Everybody and in particular to two friends of this site, namely The Vintage Toy Advertiser (TVTA) and his pet office cat WOOOF! In one of TVTA’s recent comments he mentioned classic TV shows and that he had searched FTSabersite for a design dedicated to, or a mention of a very special show. That show was Knight Rider starring David Hasselhoff as a man on a crusade to fight crime using the aid of an indestructible supercar. Hasselhoff played the part of Michael Arthur Long, a cop who was working an undercover case. He was shot in the head and left for dead by the female criminal he was investigating. Lying in the desert Michael Long was fortunately discovered by a passer-by who took him to get medical aid, and saved his life. The man who found Michael was Wilton Knight, a reclusive millionaire who provided the hospital and treatment Michael needed to survive. That treatment included plastic surgery. Michael Long served in Vietnam and had a metal plate in his skull which actually deflected the bullet intended to kill him but his face was damaged when he was shot.

Michael Arthur Long awoke with a new face, a new identity and a new challenge should he take it. Wilton Knight enlisted Michael as a secret crime fighter and supplied him with a new name, Michael Knight and….a new supercar to help his crime-fighting exploits. That car was called KITT and I was sort of challenged to create a saber inspired by this show. These are my work in progress pictures… 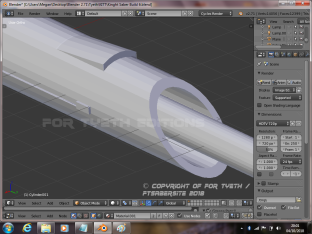 As you may know the supercar, KITT, is based on 1982/3/4 model Pontiac Trans-Am and Firebird cars. They are very sleek, aerodynamic and in the case of KITT….was jet black in colour. This caused me a problem as it is hard to make details stand out on solid dark objects! But if you check out the picture above you can see the slanted emitter that reflects the hood and nose of the car, above which is a bulge. This bulge is the housing for KITT’s iconic sweeping red light sensor you see as “he” drives toward you (yes KITT is a he, voiced by actor William Daniels). The switch plate is just below that sensor bulge but isn’t visible with out the textures but you’ll see it below. Next on the hilt are two panels to represent the “T-Bar” sunroof of the Pontiac which enabled KITT to have ejector seats! At the very bottom of the hilt is the pommel, complete with Tyre Grip knurling around it’s edges and the logo of Wilton Knight’s corporation Knight Industries (fans will remember seeing the chess piece logo on the side of the semi-truck used as a mobile headquarters!) AND there is a SPOILER! No not a spoiler to ruin the enjoyment of a show or film but the aerodynamic kind to improve the performance of the car. I considered adding one to the hilt but didn’t as I thought it may look too busy, but after giving TVTA a sneak peek he suggested I add one…so on receiving great advice I did. Now enough chatting how about some Glam Shots? OK here are the rendered pictures…

I have done my best to show the details of this hilt but as I mention due to KITT’s colour scheme it is difficult to show details on dark objects. However hopefully you can see the famous red sweeping sensor above the emitter (with a new yellow blade to represent headlights!). There are two orange indicator turn lights either side of the hilt to make it street legal 😀  Also the activation switch is modelled on the electronic display used to mimic KITT’s “mouth” on the car’s dashboard. In reality I would use a touch sensitive panel similar to a smartphone screen lock, you swipe your thumb up or down to switch the saber on and off. The pommel has the Knight chess piece logo in silver and there is of course the Spoiler that just finishes the hilt perfectly. OH wait I need one more thing for this to be legal….a license plate!….How about one of these?….

Ok folks that just about wraps up this design. I’d like to thank TVTA and Wooof! for the inspiration and suggestion to come up with this hilt. Please be sure to check out their site showcasing classic advertising material, just click HERE.

And again as always thank you to all of my viewers and followers, new and regular, you are all much appreciated (and a Hi to my friend Rebel from Hong Kong, I saw you had visited!) And to everyone please be sure to call back for future posts as I have those two movie blockbuster film hilts coming soon. (One is based on another car and the second is based on a film that just released a 5min trailer!) So thanks again and