Hello Everybody, today we venture to the Manga Universe and the world of “Hunters”. I am referring to the Manga/Anime phenomenon known as Hunter X Hunter where a young kid called Gon Freechs aspires to become a Hunter, a specialist member of the population who are expert archaeological treasure hunters and for some….Assassins! To become a Hunter you have to be licensed but there is a snag…the success rate for passing the tests is 1 in every 100,000! This doesn’t deter Gon Freechs however and after discovering that his long lost (and presumed dead) father is a Hunter, he embarks on becoming a Hunter in his father’s footsteps and tries to discover what happened to his dad. Well on a perilous mission such as this he will probably need some protection so here is my solution…Anime Hunter!….

I think this would suit a Hunter and help them in their missions quite nicely. And I think this particular saber matches Gon Freech’s sense of fashion, I managed to match the colours to his outfit! The blade is a nice yellow colour to compliment the green and orange powdercoat. The blade on this hilt is based on a Lightwhip but I imagined this blade was capable of being both a flexible weapon as well as a solid fixed blade (similar to the whip/pole gadget Gon uses in the series)). You will also notice the blade projects from an emitter with three black spines which I thought looked like Gon’s hairstyle. The rest of the hilt is functional but is coated in a green powdercoat with contrasting orange banding to match his outfit. 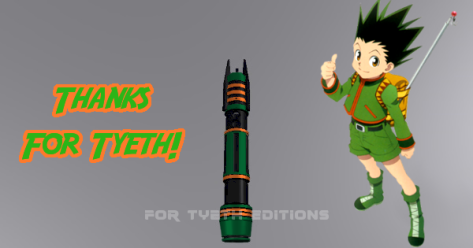 Hunter x Hunter was created by Yoshihiro Togashi and so far there have been 370 chapters condensed into 35 volume books. There have also been animated television series, movies, ten computer games, a compilation CD of the music from the games and series….they even produced TWO musicals based on the franchise. This makes it one of the biggest selling Manga/Anime franchises in history (in Japan alone up till 2014, there were 66 million copies sold!).

Well I hope you liked this hilt (especially you ArtistByBeauty, I discovered your love of Hunter X Hunter when I watched your 20 questions video. Hopefully viewers, you’ll go and check out Capili Jiron’s blog at: Artist by Beauty) But sadly I am now running out of time and will have to bring this post to an end. I hope you will all return to see future posts, I appreciate all the support you give me. Till next time.

“Anime Hunter Lightsaber” is a For Tyeth Edition design and is ©Copyright of For Tyeth/FTSabersite 2018.

“Hunter x Hunter” was created by Yoshihiro Togashi, and the Manga Comics are published by Shueisha and Viz Media. The animated series is produced/distributed by Viz Media and Nippon Animation. All names, logos, images and related material are ©Copyright/Trademark of their respective owners.