Hello Everybody, recently a new extended trailer was released for the new upcoming film Solo and with it were some arty publicity posters. However there was a problem, the main characters each had a poster, Han of course then Chewie, Lando and Q’ira. There was also a bit of a buzz around the Internet about a new droid but this “main” character didn’t have a poster! This droid is of course L3-37 or “Elthree” as she is fondly called. Elthree travels with Lando and is programmed as a female personality, carries out repairs on herself using whatever spare parts are around but they left her out of the line up of posters so I thought she might need cheering up. And how better to do that than to design a saber based on her? Well here is my design L3-37 “Elthree”… 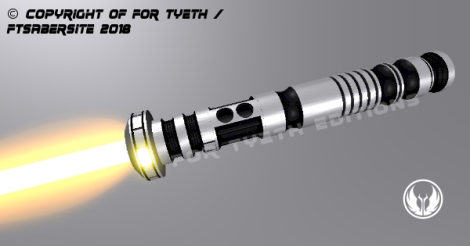 Elthree is made up of many random parts and is “one of a kind” and so too I hope is this design…though I did carefully pick out which parts to use! The first part is the amber blade and LED setup which matched the sepia desert like colours used in the aforementioned posters (giving them a Western Cowboys film style look). The emitter is next up and reminded me of Elthree’s head and neck, including the rectangular block decoration around the edges. Now Elthree has a distinct sensor built into her head that shines out and to recreate that I thought it would be possible to cut a hole into the emitter part to allow some light from the blade to shine through, creating her “eye”. The switch section forms the torso of “L3”. As the film hasn’t been released there doesn’t seem to be many pictures of Elthree’s lower body so I picked parts that looked vaguely robotic. Here is one picture I did find of the new droid.

As you can see the legs are missing from the shot so I apologise for the educated guesses I had to make building the lower section of the hilt but I’d like to think I recreated the head quite well! (Oh, and the title image at the top of the page is a little homage to the Solo movie posters!)

I hope you liked this design and when I get the chance to see the film I may return to this hilt and work on improving the “legs”. Unfortunately time is running out again and I will have to bring this post to an end. But before I go as always I want to thank you all for visiting and supporting me and the site. I have recently had a visit from a nice  “artistic person” from Australia (yes I did sense you!) so thanks for calling in wherever you are in the galaxy! Till next time.

“L3-37 Elthree Lightsaber” is a For Tyeth Editions design and is © Copyright of For Tyeth/FTSabersite 2018. “L3-37”, “Elthree” and all other names, logos and related material of the film Solo are Trademarks/© Copyright of Disney/LucasFilm 2018.