Hello Everybody, my best laid plans have been put on hold due to the fact  my friend with the hilt I hoped to showcase is having technical issues sending me the pictures. However while working those problems out I had the chance to browse WordPress and I came across an interesting post topic shared across two blogs. The two blogs are authored by two young ladies called Mei-Mei and the second is called Kiri. The topic they shared was a Star Wars Mandala Challenge, where both ladies colour in the same picture from a book of SW themed mandala pictures then compare them. Well both decided to colour in the picture of an Astromech droid and both chose to colour it as R2-D2. I commented that they had missed an opportunity and could have filled the pictures in to look like another less known droid with a beautiful and moving tale behind it called R2-KT. R2-KT is a droid that was built by the R2 Builders’ Club who heard that the daughter of the founder of the 501st Legion cosplay group was terminally ill with brain cancer. The young girl was called Katie Johnson and as her condition deteriorated and forced her to be bed bound she wished she had a droid to look over her while she slept…just like Padme Amidala had with Artoo. The R2 Builders’ Club raised funds and collected parts and made that wish come true in the shape of R2-KT a pink and white droid with a “heart of gold”.  R2-KT accompanied Katie through her final days and this design is my tribute to the brave girl and to the talented, kind hearted people who built R2-KT… 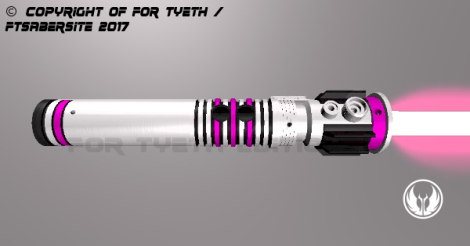 Of course this saber is a repaint of SensorScope Lightsaber – Inspired by R2-D2 but I still think the colour scheme fits the hilt well. The design represents the sensor array the pops up from the famous silver dome of an Astromech. The story of R2-KT doesn’t end here however, as word of Katie’s story reached George Lucas who filmed her a special message and after Katie eventually passed on to the Living Force, the droid travelled the world visiting children’s hospitals and raising funds for charity. The toy company Mattel made an R2-KT Hot Wheels car, and Dave Filoni went even further and made the droid part of official Canon by having the Astromech appear in “The Force Awakens” and the animated “Star Wars: The Clone Wars” series. The appearances in TFA were brief but did happen and here’s proof…

Yep that’s R2-KT looking after Poe Dameron’s X-Wing fighter at the Resistance Base! You can read more at the Star Wars Databank and on Wookiepedia-The Star Wars Wiki.

Now back to the posts that prompted me to rework this design. The two blogs are as follows:

Jedi By Knight (A Nerdy Girl’s Blog) is written by Mei-Mei, and her mandala can be seen by clicking HERE .

Star Wars Anonymous  is written by Kiri, and her mandala can be seen by clicking HERE .

And I guess it’s only fair that I share my attempt at colouring in some pictures, here are R2-KT and my Jedi Interceptor.. 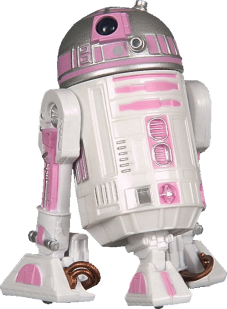 And my Jedi Starfighter!

I hope you liked this post and my feeble colouring in efforts (I don’t do a lot of art!). Next week I may be talking about some film that’s being released on the 14th Dec (have you heard about it?  😀 ). I’m hoping my birthday present is a ticket to see The Last Jedi. And my friend’s fantastic saber will appear very soon so please call back to see these posts, but for now thanks again for your support it means a lot. Till next time.

R2-KT was built by The R2 Builder’s Club and appears in “The Force Awakens” and “Star Wars: The Clone Wars” which are Trademark/© Copyright of Disney/Lucasfilm Ltd. “R2-KT Lightsaber” is a For Tyeth Edition and is © Copyright of For Tyeth/FTSabersite 2017.