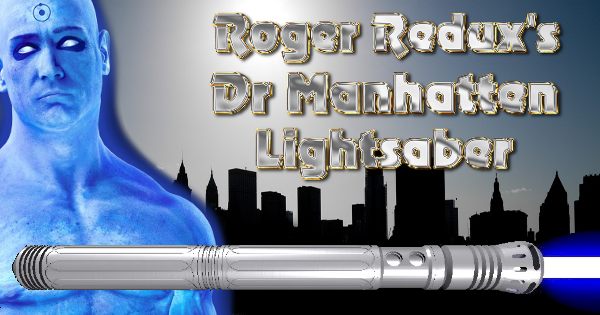 Hello Everybody, I have a surprise for you all today. From the above title you may have guessed I  am about to introduce another Guest Designer! His name is Roger Redux and is also a member of the same forum as I am. Roger has posted a few designs which caught my attention as you could see the thought that had been put into each. He created this design based on DC Comic’s Watchmen character Dr Jonathon Osterman, the physicist who as a result of a freak accident was physically erased from existence. Dr Jonathon Osterman survived however in a scattered form and over time his body “reformed” causing his colleagues to think the laboratory facility was haunted. Not surprisingly, as Dr Osterman’s first appearance consisted of just his dismembered eyes, brain and nervous system! Further re-appearances occurred as more of Osterman’s body parts reconnected. Eventually a fully formed humanoid Jonathon Osterman emerged but he was bald and his skin glowed a shade of blue. I will continue the story after I present to you Roger Redux’s Dr Manhatten Lightsaber… 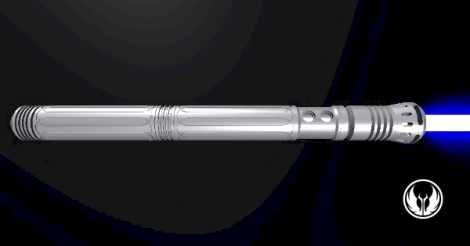 Dr Osterman was now an ethereal being with superpowers and as always happens, the US Government discovered him and coerced him to work for them. He was given a new outfit and a new name…Dr Manhatten, after the Nuclear Scientist. Dr Manhatten discarded the helmet he was given and instead branded his forehead with a simplified image of a Hydrogen Atom. These little details are captured in this design. The emitter projects a Manhatten Blue blade just like the unearthly glow of the man himself. The body sections have interlinking ovals which represent the “Theory of Relativity” that his father studied. His father then forced Dr Osterman to study physics which in turn lead to the accident and the change into Dr Manhatten.

Over time Dr Manhatten discarded his outfit only wearing it in public situations and to reflect this Roger discarded the silver body sections and replaced them with two leather wrapped parts that have the same shade of blue as Dr Manhatten glows. I liked this as it showed Roger’s thought process behind his design!

I would like to thank Roger Redux for allowing me to share this design with you all and I am pleased to say he has a few more hilts which I will be showcasing in future posts! So Thank You Roger and thank you to my followers and viewers for checking out this talented designers’ saber! I hope you will all return to see more new sabers from my friends and I. Till next time.

“Dr Manhatten Lightsaber” is a Guest Designer saber and is ©Copyright of Roger Redux used here with permission. Watchmen, Dr Manhatten, Dr Osterman and all other names, images and related material are Trademark/©Copyright of D.C. Comics.

One thought on “Dr Manhatten Lightsaber – A Roger Redux Design”