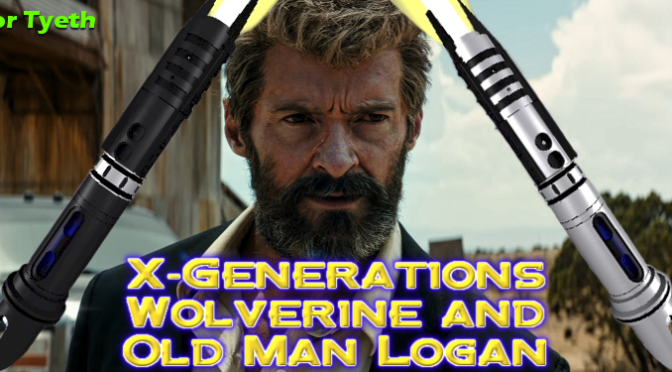 Hello Everybody and welcome to part two of Wolverine’s story. Wolverine had many adventures and missions which you will have seen in the comics and films. But we are all subject to the punishment of “Old Father Time” and we age. So too does Logan and in the upcoming film we see the results and repercussions. His past comes back to him as a young girl, very similar to him is in need of protection from a group of Anti-Mutant hunters. The girl is similar to Logan, because the scientists who experimented on him years earlier had sampled his DNA in an attempt to create a human-mutant super weapon. And X-23 Laura Kinney the young girl, was the result of their work…and Logan’s “Clone Daughter”. The new film and Logan’s character are much darker than in previous showings and I have tried to demonstrate that in this second design for Old Man Logan, this is Logan Generation…

This is Logan X but finished in an overall black coating. The colour represents all the shadows and past history in Logan/Wolverine’s life, however there are still glimmers of his greatness in the form of the blade and crystal chamber which still glow with his trademark X-Men colours. And there is a band of silver to represent a hope that he will succeed in protecting and sealing his legacy.

Will James Howlett, Thomas Logan, the man we know as Wolverine be successful? We will have to watch the new film to discover his fate and that of his offspring. I realise this was a heavy and long post so thank you for looking through all of it! I hope you enjoyed it and will return to FTSabersite for upcoming posts to see many more new designs. Till next time.

Wolverine was created by writer Len Wein and Marvel art director John Romita, Sr., who designed the character, and was first drawn for publication by Herb Trimpe. Wolverine, Logan, X-23 Laura Kinney and all related names and material are Trademark/©Copyright of Marvel Comics/Entertainment.

One thought on “X-Generations Lightsabers – Two Sabers for Logan”