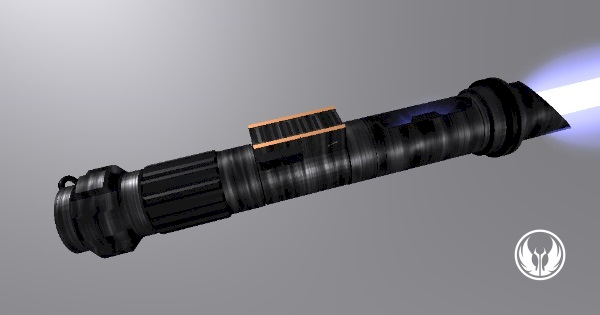 Hello and Welcome Back Everybody! I hope you and your families enjoyed the festive season however you celebrate. I have just a “Housekeeping” duty to perform before I continue. The piece of news concerns this site and it’s visitors, I would like to say thank you to the person from Finland who checked out FTSabersite on Christmas Day- You were my 300th visitor!

Now onto sabers! Just before my days off I got to see Rogue One and it has triggered a few new designs. I have a weapon for a Space Station Commander in the pipeline, but first up is a saber for a Resistance Captain! The “Owner” is a leading member of the front line forces of the Resistance and helped lead the mission with Jyn Erso to attempt to get the Death Star plans. Would he succeed? He might if he had this weapon, I call it the Andorian Lightsaber…

Yes the “Owner” is the courageous Captain Cassian Andor! And I hope this saber captures some of his character. The emitter has a double pronged fork which looks a little like the front of the U-Wing transporter seen in the film with it’s wings swept forward. It also has the lozenge shaped windows found in the ship’s sliding door that Jyn gazes out of. The switch has two copper coloured strips representing both Cassian, Jyn and the trust that develops between the two. The saber’s body is rugged and solid which describes Cassian quite well I feel. He may have acted questionably at the start of the film, but by the end you could consider his actions necessary and heroic! If Cassian had been trained in the ways of the Force, he may have had a saber like this. Well I can hope he would, and hope is represented by the blue blade, just like the sky…you only have to be brave and look up towards it!

This brings to an end this saber offering, I hope you enjoyed it. I want to thank you for coming back after the festivities (and the Holiday Sentiments sent my way!). I hope you will all return to see more in future posts and if you liked what you have seen here please tell others about FTSabersite. Till next time.

Capt. Cassian Andor, Jyn Erso, Rogue One and all related names and material are Trademark/©Copyright of Disney/Lucasfilm.

One thought on “Andorian Lightsaber (A Rogue Captain’s Weapon)”