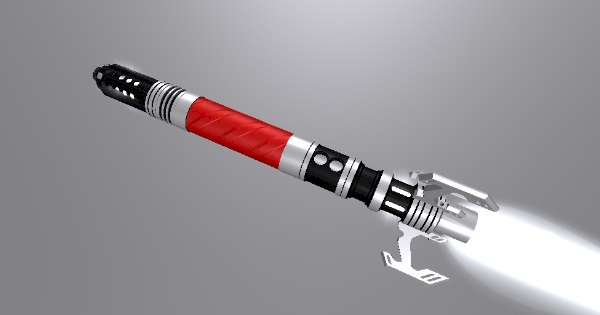 Having posted the Golden Warrior saber yesterday reminded me that after all this time I hadn’t created a design for “my team” yet! I have now fixed that and present it here.

Who are my team? Well the title may give a clue and yes I support Manchester United Football Club. Now there is a lot of ridicule if you support this team, some people accuse you of being a “Glory Hunter” or they will say “why don’t you support a team in the town you come from?”, that sort of thing. In my defence I am proud to say my support began way back in 1983 when the first big match I got to see was Manchester United vs Brighton and Hove Albion. This was a BIG match, this match was the F.A. Cup! (Sorta like a Superbowl!).

My mother managed to buy the last Manchester United scarf in the local market (because she had never heard of Brighton’s team, Sorry!) and I became a fan of Manchester Utd. It didn’t start smoothly however, as the first match resulted in a 2-2 draw, and as there was no extra time periods like in other sports the match had to be replayed. Manchester Utd won this match comfortably 4-0! I should stop reminiscing and get on to showing you all the saber, so here is Mancunian RED..

Manchester United’s nickname is “The Red Devils” which can be seen on their crest, and this saber has a Treble (the word Treble will be mentioned again shortly!) clawed emitter to represent the Devil character’s Trident. The body has a Manchester United red leather grip to look like their iconic shirts. Now a little bit of history. Some observant viewers may have noticed the three black rings near the grip, this represents Manchester United’s achievement of winning THREE tournament cups in one season. They won the English Premier League Trophy, The Football Association Cup (F.A. Cup) and as champions of England took part in the European Champions’ League competition and became champions of Europe! This was the famous year of  The Treble in 1999. The team and their manager, the great Sir Alex Ferguson became legends.

They weren’t however the first legends at this most famous club as the observant viewers will have noticed the black accents on this hilt and the lighted pommel. Back in the fifties another famous group of players sadly met tragedy. This group were “The Busby Babes”, a young team that were destined to be the force to beat in years to come. Their manager was the legendary Sir Matt Busby. The team were flying home from a European match and had to stop in Munich for fuel, unfortunately bad weather closed in around the airport. The pilot attempted to resume the flight home but the conditions caused the aircraft to run off the end of the runway, killing 23 of the passengers including most of the team. As a sign of respect black markings were added to the team’s kit and this saber also wears black in their memory and has a beacon of light in the pommel. As indelible as the date of February 6th 1958.

Manchester United rebuilt and went on to become the giant heart and soul of the game it is today so thank you for taking the time to look at this very personal saber for me.